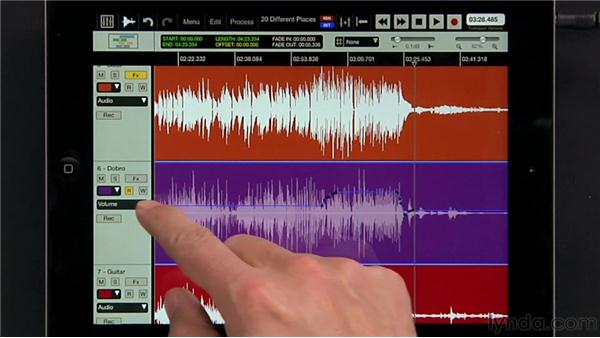 As I've been discussing throughout this chapter, a large part of Mixing your project involves…finding the right level for each track by adjusting the Faders.…But you're not always going to want to have certain tracks be the same level throughout…the entire project or song you are working on.…There may be tracks where the sound level is uneven in certain places, where it gets too loud or too quiet.…Maybe you want to bring in instrument up for a Solo and then take it back down to its original…level, or maybe you just want to make a creative choice, like taking a certain instrument…out of the Mix completely during a reverse, for example.…Fortunately, Auria includes a powerful Automation system that lets you specify exactly where…you want the Fader to move, how far it moves, and how long it stays there.…

And it's not just Volume levels that can be automated, you can automate just about every…dial, any track, and even automate effects. So let's take a look at how this works.…There are two ways to work with Automation in Auria.…