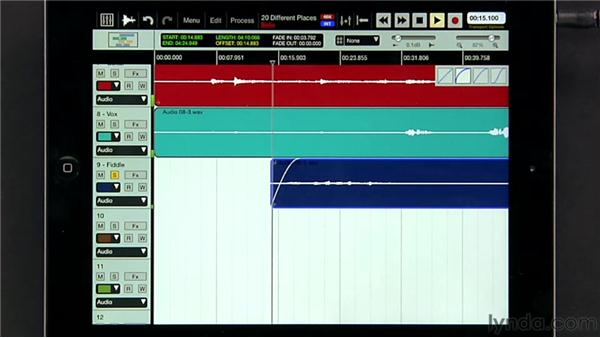 Now that we know how to select regions, let's look at how to make specific edits and changes to those regions.…I am going to play the songs from the beginning, and let's pay attention to the Fiddle part.…(music playing)…Okay, so the Fiddle part begins with two pizzicato notes followed by two long swelling notes.…

Now may be just as a stylistic choice, I want to get rid of those two plucked notes and the…first bowed note and start with the second bowed note.…Let's solo that so you can hear it a little bit better.…So here is the first one. (music playing)…And here is the second one. (music playing)…So I want to come in on that second bowed note. Now, there are a couple of ways we can do this.…I could split the region and delete the opening section which I'll show you how to do later…in this chapter, but right now let's take a look at how to trim just that region.…

Now each region has trim handles at the very beginning and end of the region.…Just zoom out a little bit here.…Now you can see these two inward facing arrows that appear in the bottom corners…