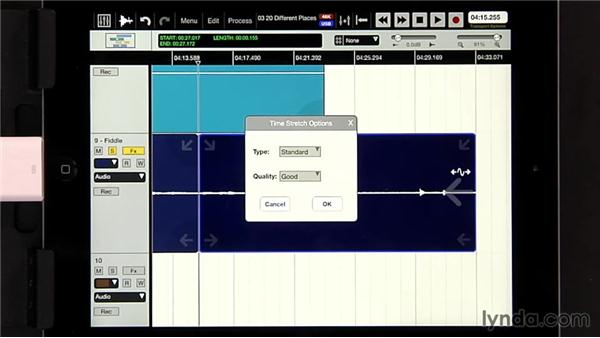 Join Garrick Chow for an in-depth discussion in this video Time stretching in Auria, part of iPad Music Production: Auria.

Occasionally you may have a recording that doesn't quite fit the timing you …have in mind for it. Maybe you recorded a vocal narration …that's 28 seconds long, but it needs to fit in a 25 second space. …And the person who recorded the part isn't available to redo it. …Maybe you have a drum lid that you'd like to use, but it's at a different tempo …then your song. Or maybe your entire music project needs …to be just a little bit longer in order to use it as a background track for a video. …Fortunately, Aria includes a powerful time stretching feature which is perfect …for situations like these. Time stretching allows you to speed up or …slow down individual regions without affecting the pitch of the recording.…

So speeding up a recording of a speaker doesn't turn them into a cartoon …chipmunk, and slowing down a recording of an instrument doesn't drop the key it's in. …So for example let's solo and listen to the last bit of the fiddle part in this song. …(MUSIC). So, maybe as an artistic choice, I want …