Setting up the audio chain 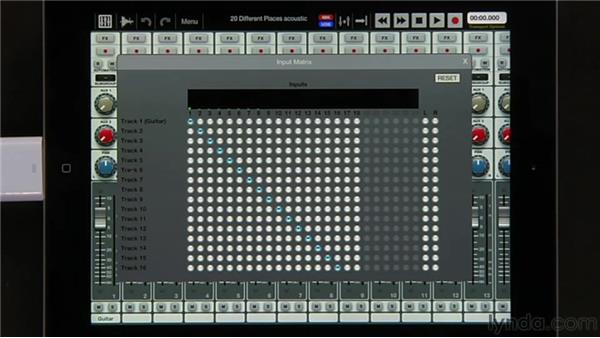 Some in the previous movie we took a look at a couple of different options we have of…input devices we can connect to the iPad.…In this movie I want to take a look at a specific example of how to get the audio from your source into the iPad.…So in this case, we are going to be using the AudioBox 1818, it's plugged into my iPad…using the Apple camera connection kit, so we have a USB connection here.…And joining me in the studio here is Mr. James Carrington to play some guitar and do some singing for us.…But we are going to concentrate on getting a guitar level at this point.…So the first thing you want to do is aim your microphone at the sound source.…

In this case, we are going to have David come over and do some adjusting of the microphone for us.…Now that you could be plugging your guitar into a direct box or into an amp, you might…be miking the amp, you could be recording any other source of music.…The most important thing is to start at the source, have that cable run into your audio…input device, and then we are going to run the audio input device into your iPad.…

Video: Setting up the audio chain