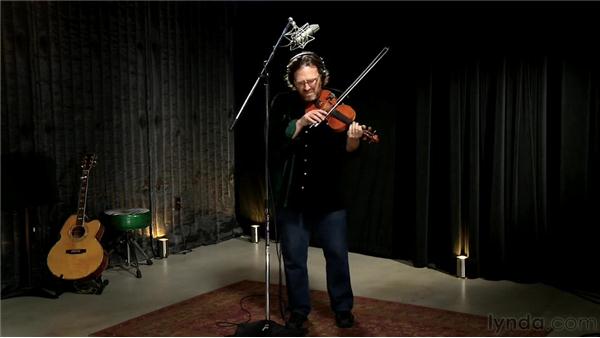 Join Garrick Chow for an in-depth discussion in this video Overdubbing a track, part of iPad Music Production: Auria.

All right, now we are going add one more track to our song, and we've set up Craig over there…with his fiddle, and we've got a microphone on him.…I have already routed the mic to the next track here in the song, we've labeled it properly,…over to Input Matrix and so we have routed the mic over there.…Now Craig asks if he could have a little bit of reverb on his fiddle as he was recording…this track, so I have turned on a Convolution Reverb setting.…Watch what happens if I go to record, though.…Go to Record Enable and hit Record, it will roll for a little bit, and now I am seeing…this CPU Overload message here, it's telling me to use a higher record buffer size or reduce…the number of active plug-ins in your project.…

Basically what this means is running the effects simultaneously with the recording is taxing…the CPU of the iPad a little bit too much.…Now one option you have here is to do what's called freezing your tracks.…This basically bounces your tracks in place and just locks them so you can't change them…