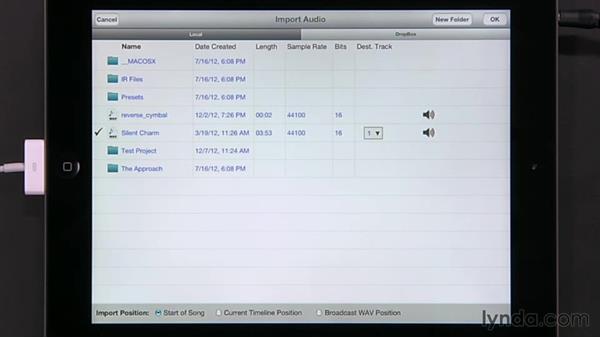 Not all of the sounds you work with an Auria are going to be sounds you record yourself,…you may also want to incorporate prerecorded sounds, loops, or samples into your projects.…To get started, connect your iPad to your computer and open iTunes.…Select your iPad, under DEVICES click Apps, and then scroll down to Apps and select Auria.…Here under Auria Documents, click Add and browse for the file you want to import.…I have a file sitting here on my desktop called Silent Charm.wav, it's just a small music…file, select that, and you can import AIFs, WAV files, or MP3s into Auria, and just like…that you can see it has now been added to my Auria library.…

That's really all there is to that. To add this file to a track in your project, open…your project in Auria and go to Menu and select Import Audio.…Here you can look at the file you imported and tap it to select it.…You can also tab the speaker icon next to it to hear a preview of the file to make sure it's the one you want.…(music playing)…Next, choose which track of your project you want to import the audit file to.…