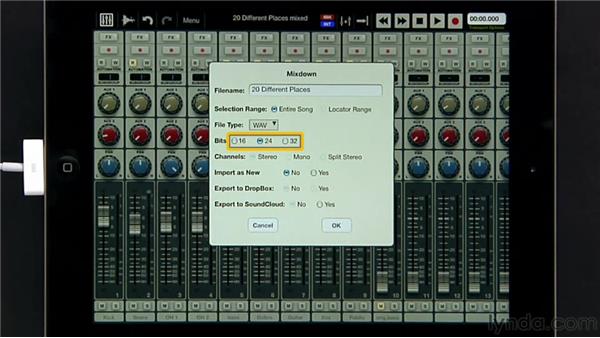 Join Garrick Chow for an in-depth discussion in this video Exporting your project, part of iPad Music Production: Auria.

Once you're satisfied with your mix, you'll most likely want to share it with others or…at least have a copy for yourself that you can play without having to fire up Auria each time.…Auria gives you several options for exporting your mixed project, and you can choose the…method and file format that works best for you and what you intend to do with the file.…So let's say I have the mix at a place I am happy with.…Now if you have access to the exercise files, you can load up a copy of this mix as I have…it to this point and give it a listen.…But I am going to place where I might have to share this with friends.…So I am going to choose Menu > Mixdown. That opens the Mixdown window.…

The first thing you can do is name your file.…Now Auria always calls every Mixdown project Mixdown.…It would be nice if it took the name of your project, but it doesn't, so you'll probably want to rename your file.…And I won't bother keeping that .wav extension, depending on what file format I am choosing,…the extension might be different.…