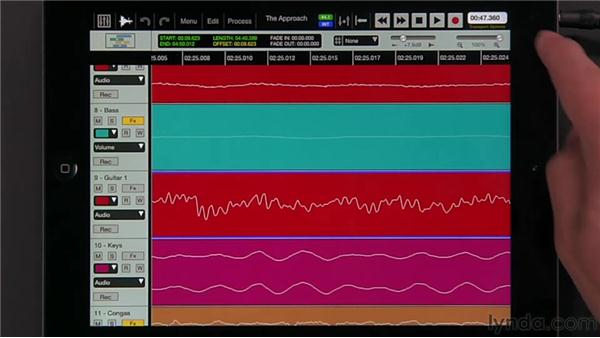 Join Garrick Chow for an in-depth discussion in this video Exploring the interface, part of iPad Music Production: Auria.

All right, let's start by familiarizing ourselves with the Auria Interface.…When you open Auria for the first time, you see the Mix window. Auria ships with the sample…song called the Approach, which automatically loads here, and you can feel free to mix and…play around with it to get practice working with Auria, even if you haven't recorded anything yourself yet.…But this is the Mix window, and this is where you mix the various channels or tracks of your song.…You can swipe horizontally to see more of the Channel Strips, any subgroups you have created,…as well as any Auxiliary Sends and Returns.…

On an iPad 2 and later, you can have up to 48 tracks of audio at once.…If you are using a first generation iPad, you can still have up to 24 tracks at once.…The Channel Strips has an FX button where you will find the most common types of processing…you'll need like the Expander Gate, the EQ, and Compressor.…Each strip also has Automation buttons, Auxiliary Send Dials, a Pan Dial, a Fader,…Mute and Solo buttons, and a label at the bottom where you can name your tracks.…