Editing with Cut, Copy, and Paste 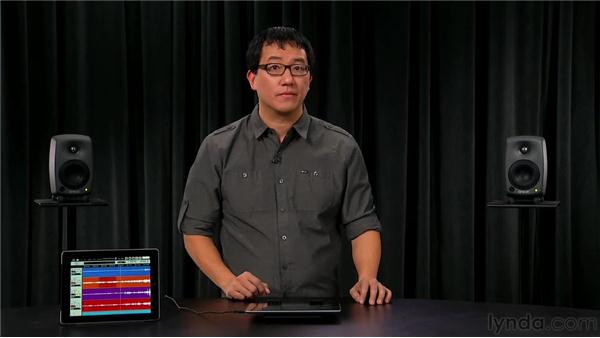 Join Garrick Chow for an in-depth discussion in this video Editing with Cut, Copy, and Paste, part of iPad Music Production: Auria.

As with most other applications in which you deal with content, whether it's word processing, graphics, or video, you can cut, copy, and paste audio in Auria, which is useful when you want to move or duplicate content in your project. Start by selecting the region you want to copy. For this example, I'll use this part of the Bass track that we punched in earlier. I'll tap it once to select it and then just like in a word processor, I'll tap Edit and select Copy. That copies the selected region to the clipboard, but leaves the region untouched where it is.

Now if I want to paste this somewhere else on the same track or even on a different track, I just need to move the playhead where I wanted the copied region to appear. Just for this example, let's go down to Track 10 here, and I'll just move my playhead right there. Now I also need to select the track where I want this region to appear. So I'll select Track 10, you can see the highlight appear around it, and now I'll choose Edit > Paste, and there is the copied region. So that's pretty simple. It works the same way with cut. Just select the region, and I'll just use this one I just pasted in, and this time I'll choose Edit > Cut.

And as I am sure you know that copies the selection to the clipboard while also removing or cutting it out of the project. Maybe I'll just move the playhead forward a little bit, make sure Track 10 is still selected, and I'll choose Edit > Paste. So your copied or cut item will appear on the selected track wherever the playhead is located. Now if I were to select another track like the Fiddle track and choose Edit > Paste, notice that places the clip right over the existing region, which I definitely don't want to do in this case, so I am going to undo that.

Also be aware that you don't have to copy entire regions. If you only want to copy or cut a selection of a region, you can make a selection by double-tapping on the region, making sure to hold down on the second tap, and then just dragging across your region. And just choose Edit > Cut or Edit > Copy, I'll just choose Copy in this case. Now another useful command you'll find under the Edit menu when you have a region selected or have a selection made is Duplicate, and that creates a copy of the selection and automatically places it at the end of the original.

This can be a very useful shortcut if you want to create a loop of drums or other samples. Just select the region, choose Edit > Duplicate and keep doing that until it repeats as many times as you need. So that's Copy, Cut, Paste, and Duplicate. Now Auria also supports the AudioCopy/ AudioPaste standard which allows you to move audio between Auria and other audio apps you may have installed in your iPad. This can allow you to make a recording in Auria and paste it into another app or vice-versa, as long as the other app also supports the AudioCopy/AudioPaste standard.

For example, I'll select this copied clip of the Bass region again, and this time I'll choose Edit > AudioCopy. And my project is 32-bit at 48K, so Auria automatically converts it to 16/44.1. Then I see this dialog box appear. Now if I want, I can name this clip I am copying, and the name will show up in certain apps that support displaying the names of copied clips. So I'll just name this bass. Notice you can also tap this link to see compatible apps.

This gives me this list of apps and any apps I already have installed appear at the top of this list. The icons next to the apps name also let me know if I can paste or copy into or out of that app or both. I can browse through the rest of the apps here and tap the Store button if I want to read up on any particular app. In this case, I'll just scroll back up and launch NanoStudio. Notice it supports both Paste and Copy. Now this is going to vary from app to app, but here in NanoStudio I have a new project created, I am going to tap the Edit button, select one of the empty drum pads here, and we'll tap Load and here I'll tap the Paste button.

That gives me a list of the audio clips I've copied with AudioCopy in any other app on my iPad. Now in this I am seeing several copies of my clip from Auria because I've been playing around with Auria a lot. You'll always see the last 12 items you copied here which you can paste into any supported apps at any time. I'll just select the most recent one, I can hear playing so I can make sure that's the one I want. And I'll choose Paste. I'll tap OK. So, now that I've imported this into NanoStudio, I can have it selected and tap Load.

And now that sample is loaded into this bank in the NanoStudio sampler. (music playing) Again, this is just one example of how AudioCopy and AudioPaste can work. In the case of NanoStudio, it also supports Copy, so I could create a beat here, copy it, and paste it into Auria. But again, the availability of AudioCopy and AudioPaste is going to vary from app to app, and it will take a little research and experimentation on your part to figure out which apps support which abilities. But now you know how to copy and paste audio within Auria and outside of Auria.

And before we wrap up here, let's go back into Auria, and I'll just delete the bass regions that I created for this example just to clean things up a bit, and that's how to work with Cut, Copy, and Paste in Auria.