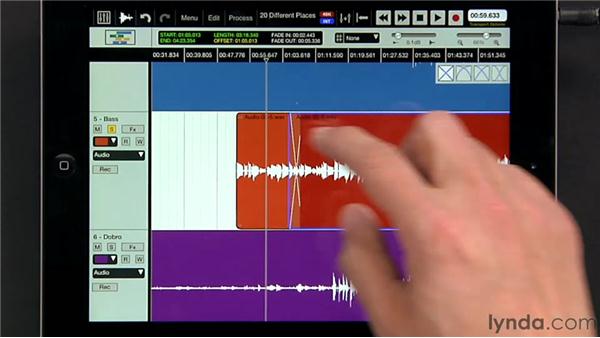 Most of the time in Auria and in pretty much all other digital audio workstations, you…want one region to play at a time on each track.…Now we have already seen that you can have regions overlapping or even on top of each…other and Auria's default behavior is to play only the audio from the topmost region, ignoring…anything in the regions underneath it.…This will let you keep multiple takes on a single track.…Occasionally, though, you will want to hear two regions at once, usually when you trying…to create a smooth edit between two regions.…In those cases you will let the two regions overlap slightly and then add what's called…a Crossfade to smooth out the sound of the two overlapping regions.…

This is actually much easier to show you than it is to describe it.…So let's look at the bass track as an example.…Here we have the region that was created when we punched in the section to fix that part of the bass line.…Now I am going to play this once, and what you will be hearing is this original region…here until we reach the punch point, and you will hear that second region pop in.…