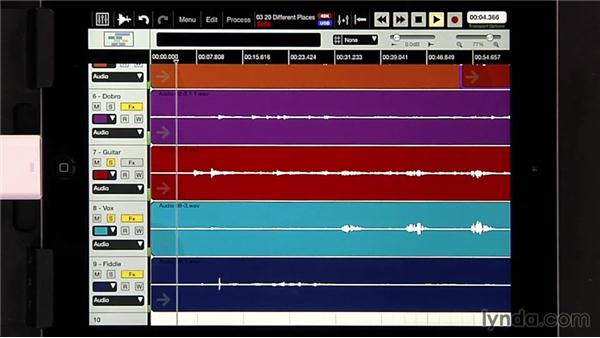 In this movie, I'd like to take a quick look at a variety of other editing tools …and techniques that are available in Aria. …For example, previously we saw that if you wanted to split multiple regions at …the same time. You would have to first tap the multi …select tool and then select the regions you wanted to split. …And you can just place your play head where you need to split, choose Edit Split. …You can see that splits the selected regions. …Let's undo that. But you can also split all your regions …at the same place if necessary. For example I have about five seconds at …the start of the song where we here nothing and then James does his count in.…

Now if I move my player to just before that point where I see the wave forms …indicating the beginning of the base and the guitar parts here, like there. …In fact I can actually use two fingers on the Timeline to do a real time scrub and …listen to the waveform. (SOUND). …Right about there. Now if that's where I want to do the …split straight across all of the regions, first of all let me turn off the multi …