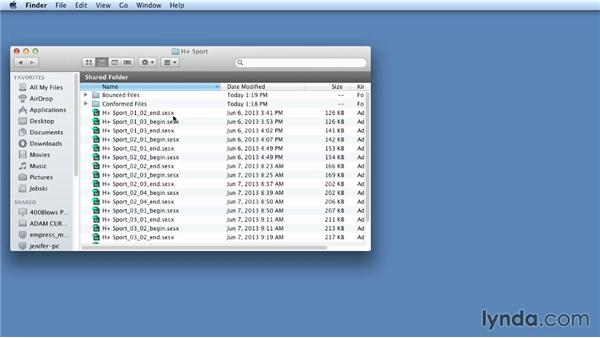 Join Scott Hirsch for an in-depth discussion in this video Using the exercise files, part of Building a Commercial Soundtrack in Audition.

If you are a premium subscriber of lynda.com you have access to the exercise files used throughout this title. The exercise files have been compressed to a zip file called Exercise files. Download, and uncompress this file, and you'll see a folder called Exercise Files. In this folder you'll see the mock client folder we made for this course and the exact folder hierarchy we use and describe. And here we have an outside project folder. And in here, again, we have the project file folder hierarchy we describe in the course. In the audition files folder, you'll see an outside folder called H+ Sport.

That's our project folder. And in here, you'll see a bunch of .sesx audition session files. To open these, you can go to File, Open in Audition. Or you can simply double click on these to open them in Audition. As long as you copy this folder to your work hard drive and don't go moving folders around, all files will link up. The first time you open it or if something gets moved, Audition might ask you to relink the files and that's what we're seeing here. If this is the case, just navigate to the place where the file is, in this case it's on our desktop.

Select the file we're looking for which is H plus V O (UNKNOWN) and click Open, and Audition will relink the file for you. However you shouldn't have to do that if you don't move any files around. If you don't have access or haven't downloaded the exercise files, that's okay. You can follow along with your own media.