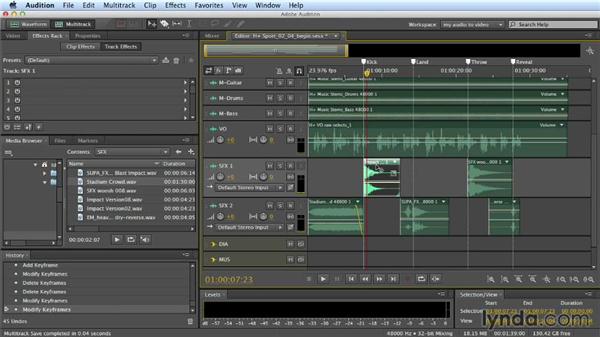 Join Scott Hirsch for an in-depth discussion in this video Using clip gain and effects, part of Building a Commercial Soundtrack in Audition.

In Audition, clips like the sound effects clips we edited into…our multi-track timeline, can have their own volume levels and effects.…In this movie, we'll check out how to add…clip volume and effects to our sound effects clip.…The first kick effect clip, impact_version_02/g, is a little loud, and…also could be enhanced to match the stutter editing that happens.…Right around here.…(NOISE).…So first, let's adjust the volume using Clip Gain.…I went over this in the sound effects movie,…but here we have Clip Gain that can be…individually drawn up or down for any clip, and…it's just independent to the clip, not the track.…