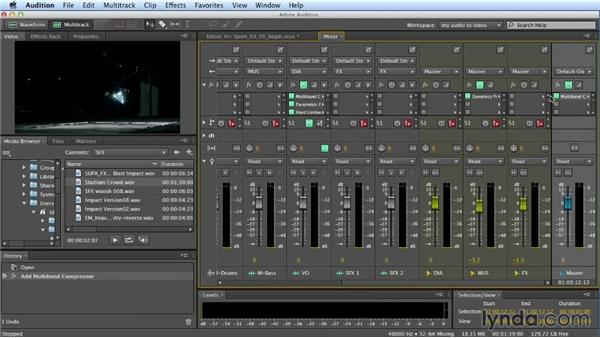 Join Scott Hirsch for an in-depth discussion in this video Mastering and final output, part of Building a Commercial Soundtrack in Audition.

Once we have our mix finalized, it's time to put the final…sheen on the mix, this is often thought of as the mastering stage.…And this movie we'll do this by using a…final master bus compressor, and then we'll export our mix.…Just like other tracks we can put plugins on the master volume.…Here in the mixer, scrolling over, you can see the master…volume control, just like all the other tracks, has a plugin rack.…You can also see that because we've been playing it,…our tracks have clipped the master.…So this is one reason why we'll use a…master bus compressor plug-in on the master track just to…tame any stray transients that might clip our master…but we want it to be as loud as possible.…