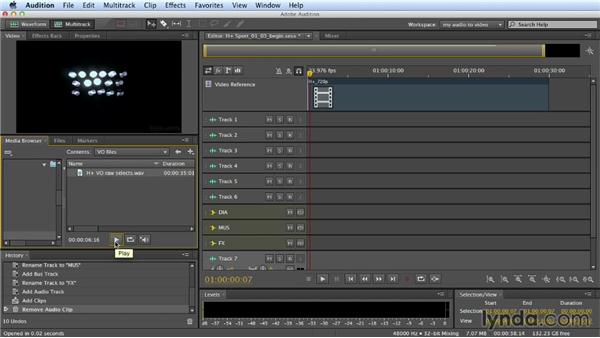 Join Scott Hirsch for an in-depth discussion in this video Importing elements, part of Building a Commercial Soundtrack in Audition.

Now that we're set up to work with audio for video, let's import some elements into…the timeline and this movie will get the…video in place and import the voice over track.…First we'll import the video, we can do this from the File menu…under Import or we can use the File browser in the multi-track session window.…Let's try that.…We'll navigate to our assets folders, which is here on our desktop.…There's our client folder. There's our project folder.…And there's out assets folder.…And in here, we have our video folder. And there's our video.…So to add this to our multitrack session, we can simply click on it.…

And actually, if we Right click on it, we can say Insert into multitrack.…And we can put in a new multi-track session.…Or the one we're currently in right now. Which is H Plus Sport 0103 begin.…So I'll click that and there it is.…It pops right in.…You can see there's now a video track and a time line…that wasn't there before.…And as I scroll through, you can see the video shot up in the Video pane.…