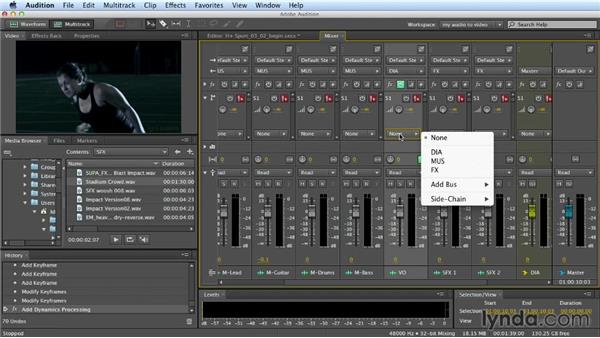 Join Scott Hirsch for an in-depth discussion in this video Ducking techniques, part of Building a Commercial Soundtrack in Audition.

Because commercials are almost always comprised of…music and a voice over track, there's a…special trick used by some audio engineers…to overcome any competing between the two elements.…While always keeping them as loud as possible when they aren't…playing together, it's called Ducking and we'll demonstrate it in this movie.…One thing I want to to take care of though before we…go any further, you might have notice this as we were working.…The voice-over track, which is a mono file, is actually in a stereo track,…if I solo it, you'll see what I mean. >> You work hard and play harder.…Water can't give you back what you.…

>> Now see how it's just coming out the left…channel, we actually want it to come out both the…left and right and this is because it's a, again,…a mono file but it's placed in a stereo track.…Am going to pop over to the mixer here for…a second and notice there's a quick little handy…button here that just says sum demono/g, click on…that and that should take care of our problem.…Let's check it out. >> Lose H Plus Sport has what you need.…