What to do after the album is finished 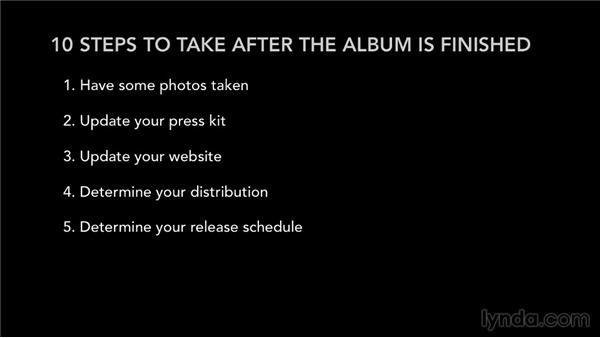 You finish writing, recording, and mixing the album, but it turns out that that was the easy part. Now's the time to get the ball rolling on all the things you need to take advantage of your new release. Here are ten steps to take after your CD is completed. Step number one, have some photos taken. If you don't have the album artwork together, then you may need photos for that. But even if those graphics are well in hand, you're going to need new press photos anyway. Have them shot by a professional as soon as possible. Step two, update your press kit.

You do have one right? If you do, update it to reflect your latest release. If not, time to get started on it. You'll need both print and electronic versions, and each should include at least a bio, pictures, album artwork, music and video samples, a backgrounder on the band, media quotes, and press releases. You might want to check out my lynda course on Website Management for Musicians for more information on press kits. Step three, update your website. Once again, it's time to reflect the fact that you have new music to offer.

Updating a site takes time, so the sooner you get started updating, the better. Determine your distribution. If you aren't signed to a record label, now's the time to get with Tune Corp, CD Baby or another distributor to help make your music available to the world. If you have a substantial following already, it might be time to check out the various label services that the major labels now offer, without the need to sign a record deal. Step five, determine your release schedule. If you've just completed an album ask yourself these questions.

When is the official album release date? What will be the first single and when will it be released. Which songs will be the second and third singles, and when will they be released? You might also want to check out the upcoming video on the new ideas for a release schedule, before you select these dates. Step six, submit your album to Gracenote and the AllMusic Guide. Gracenote is a service that recognizes the songs on a CD when you put it into the computer. AllMusic Guide provides provides all the pictures and bio info that you see on iTunes and other music sites.

Submit to both so people get all the details they need when they play your CD. There's an upcoming video on how to submit to these entities. Step seven, plan your social media campaign. This includes Email blasts to your fans, as well as posts on Facebook,Twitter and Google+. You want to determine just when everything will happen, in what order it will happen, and who's responsible for getting it done. Step eight, create some videos. Many people get all their new music strictly from videos and YouTube these days.

Get a video out as soon as possible. Even if it's only composed of a single still picture and the music. Real videos take time, and you can release the official video later. Get something out there now. Step nine, book your album release party. An album release is a good reason to throw a party and celebrate the fact that you've accomplished something that took a whole lot of work. That said, it's also the best way to get the word out about your new album, especially to the local press. Step ten, play to support the album.

It's time to get out there and play for people to expose them to your new music. Some artists and bands gig to support the album while others use the album to support their gigging. Decide which category you fall under, make a plan of what you're going to do and follow it through. There are more things that you can do to promote your release, but these are just the bare minimum. Remember, just because you've made an album, the world won't beat a path to your door. You have to be proactive in getting the word out.

5/9/2014
Learn how to make more money selling your music. This course examines a two-tiered approach to music promotion and sales: one geared toward CDs and LPs, and the other toward digital downloads. Industry insider Bobby Owsinski first explains why it's still important to make CDs—to use as marketing tools and bundle into unique music packages to sell to fans—and prepare for album releases so that you get the most bang for your marketing buck.

Next he moves into the digital realm, giving an overview of the digital music services and players available. Bobby shows how giving away some of your music can actually lead to more sales, and how to set the price point for your music. He discusses the importance of metadata and registering your songs with performance rights organizations to ensure you get paid when your music is played on the radio, TV, or the Internet. Finally, Bobby wraps up by explaining how to submit your music to the largest online services, including Spotify, Pandora, and iTunes.

Video: What to do after the album is finished