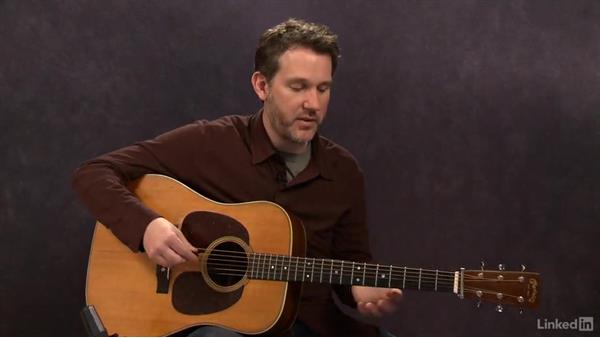 Bryan introduces a series of exercises that are designed to get the students used to the concept of pocket and feel, as well as getting comfortable with transitioning from strumming, to single note playing, and back to strumming. This will help you develop an ear for note choice and smooth playing.

- The next series of exercises will hopefully encourage you to practice some of these groove and developing internal pocket and feel. We're gonna encourage transition from strumming to single note playing, and back to strumming. And part of what internal groove and pocket is is consistancy, and, again, we've talked about a lot of just basic rhythmic, smooth elements of flatpicking in bluegrass. (guitar music) We'll jump right into this thing, and there's no real...

This is more, it's gonna open the door to some improvisation that will be kinda worked on a little bit later. Right now, we're gonna continue to introduce some different kinda things, and the goal kinda is to challenge you. Now that we've built lots of strong technique ideas, and approach thoughts, we're gonna start employing this from a more musical kinda way. We're gonna practice. The idea is to practice... Basically practice realizing a way to play rhythm, way to play single note, way to get back to rhythm, to where your technique and the way that you can kinda work back and forth, you start using your mind a little bit.

One of the things we're gonna start working, a friend of mine calls it the triangulation of the left and right hand in the brain. And so we're gonna start listening to yourself, developing ear for, not only note choice, but developing ear for what sounds and feels like smooth playing. The exercise, basically, here, I've got a metronome set at 65, and I'm gonna start, basically, I'm just gonna limit what I work around to G, and I'll have G chord. We've talked about different voicings. You can use that. This is where I want you to sort of experiment with things.

And what I want you to feel is how these bars have a downbeat. I want you to plan for the downbeat. When you go back into strumming, you need to be aware that there is an obvious downbeat. Now you wanna make it a little more random. Up into a C. Now we're at C.

That's the basic exercise. And, again, the goal, what we're trying to do, and we talked about how to sort of manipulate the metronome. And let me show you a couple other ideas within our first, you know, thinking about shifting pulses. So here's, again, the metronome at 65 beats a minute. (ticking) (guitar music) Now, instead of starting on a downbeat, I'll start on an upbeat. So I had to make a choice at the end of that scale.

I knew that that downbeat was coming up. I could feel that the downbeat was imminent. So I had to make some choices. (guitar music) I wanted to get back to G, so I'm gonna stay within this scale. And this is kinda where the improvisation doors open, because as an improviser, especially in bluegrass, and trying to play solid, and trying to communicate what we're gonna call very musically strong and rhythmically strong ideas, and bluegrass is all about, especially with the solos.

If you think about Tony Rice, and some of these more powerful guitar players, one of the things that makes their playing powerful is the ability to really not just hammer the downbeat, but make it very much an obvious kind of thing where these downbeats fall. We're getting a little more conceptual at this point. And the choice-making at this point is not sorta as an improvisational kind of approach to this is not really entered. But here we go with a... (guitar music) And there's still some room in the bar.

And so I make a choice to get there. And this is the kinda things I'm able to do fairly quickly. And I would encourage you, one of the tricks of practicing improv is to stop and think about, all right, I've got this many notes in a bar, and I'm working out of a scale, and all I wanna do is get to a downbeat with a G. And so, you can just keep practicing those things. And that's one of the strengths of this kind of exercise, is that it opens your mind to thinking about how notes fall and where they fall in order to kinda reach a certain goal.

And our goal here is just to get back to our rhythm. So, I'll show you a few little more ways to kinda deal with that at 65 beats a minute at a G. (ticking) (guitar music) So I'm gonna start with an upstroke. I left some space that time. What I'm trying to do is...

Imagine where the downbeat, and I'm not really trying to plan a certain number of bars, I just know that there's a downbeat coming up. I'm feeling how these bars, the space of the bar. And I'm trying to imagine... You know, usually we talk about the flatpicking. There's quarter notes and there's eight eighth notes in a bar. One, and two, and three, and four, and, new downbeat. So, what I'm trying to do is help you solidify your internal sense of that without having to read it, without having to sort of be told, necessarily. Just experiment and, once you feel that sense of where those downbeats are, once you feel those a little stronger, you'll find that this kind of exercise is easier to do.

And it'll take some time if you're not used to this kinda thing. But again, it's opening a door to a real solid way to improvise within bluegrass. And I'll show you a couple other ways to kinda go about it here next. 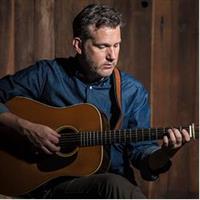 8/23/2016
The bluegrass style is one of the most rewarding and technically demanding ways to play guitar. Once you've mastered the basics, you can play most songs. But becoming a great bluegrass guitarist has a lot to do with feel and dexterity—skills you can only master with the help of a great teacher. Bryan Sutton is arguably the best flatpick guitarist since the late great Doc Watson. In this course, part 4 of Bluegrass Guitar Lessons, he shares his Grammy-winning techniques with you.

Learn how to maintain flatpicking flow—consistent tone, groove, and musicality. Find out how to play along role-oriented lines, and find more musical opportunities. In chapters 3, 4, and 5, Bryan shows how to apply what you've learned to intermediate versions of popular bluegrass tunes. Each lesson helps you add a challenging new dimension to your sound, and improve your overall musicality.