Miking the snare drum: Technique one 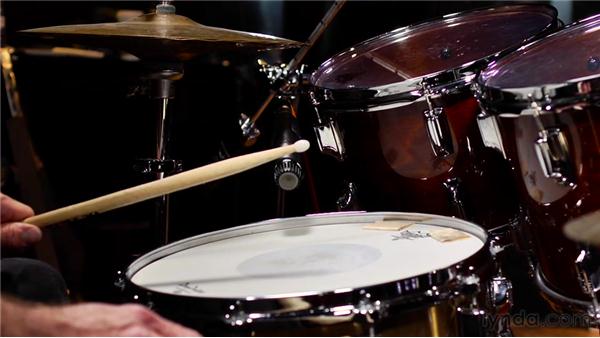 Join Bobby Owsinski for an in-depth discussion in this video Miking the snare drum: Technique one, part of Audio Recording Techniques.

There must be a dozen ways to mic the snare drum, and every one of them will capture the sound just fine if the snare drum sounds good in the first place. Let's look at what has become the standard way that the snare drum is miked these days. The thing about the snare is that not only you're trying to capture the sound, but you're trying to get the best isolation from the other drums as well, which can alter your approach a bit by changing the mic position. The other thing is that you want to make sure that the mic is out of the way of the drummer, so he doesn't hit it. Not only does that sound pretty bad, but it is not very good for the mic either.

Always ask if the drummer thinks if it will be in the way, and be prepared to move it to where he thinks it won't be hit. (music playing) Since the mic is placed so closely to an extremely loud instrument like the snare, especially with a heavy hitter. It has to be able to handle a lot of level without distorting. That's one of the reasons why the Shure SM57 has been such a go to mic for so many engineers. There are plenty of other engineers who love small diaphragm condenser mics though, so don't be afraid to try one if you have it.

But be sure to use a 10 or 20 dB pad so it won't overload. Place the mic stand somewhere between the rack tom and hi-hat, so it's out of the way of the drummer. Then position the mic, so it's about one inch or about two of your fingers above the rim. Point the mic towards the center of the drum head, make sure that the mic stand isn't touching any drum hardware to prevent the mic from picking up any unwanted vibrations. (music playing) Sometimes pointing the mic across the top of the drum towards the far end of the rim, can provide just the right sound for the track. (music playing) If you place the mic up higher, say about 6 inches or about the size of your hand, it's a bit easier to aim at different spots on the drum.

But you'll also get a bit more leakage. Try aiming at more towards the rim for a different sound. (music playing) In the end what you're trying to do is to place the mic where it has the best combination of body and stick sound. Sometimes the snare has too much ring. The best way to get rid of it is to add a piece of tape or moon gel or even your wallet. Sometimes what sounds bad in the tracking room, actually sounds good under the microphone. So make sure you listen before you pass judgment.

(music playing) To sum things up, not only are we trying to capture a good snare sound, but maintain some isolation from the other drums and cymbals and keep the drummer from hitting it as well. A standard way to do that is to place it about one inch above the rim, pointed towards the center of the drum. (music playing) If the mic you use has an internal pad, make sure you use it, because the hot levels that the mic will capture might overload the preamp without it.