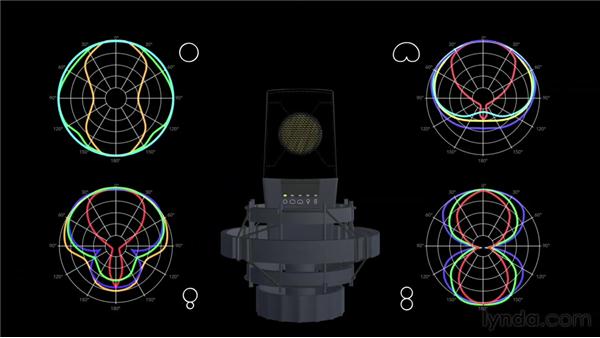 This polar diagram shows the signal pickup level, sometimes shown in decibels, from all angles and at different frequency ranges. To make matters a bit more confusing, all mics have different polar patterns at different frequencies. While a mic can be very directional at one frequency--usually one of the higher frequencies--it can be virtually non directional, or omni-directional, at another. The reason why the polar response is important is it determines how the mic can be used, which can make a big difference in multi-microphone settings where leakage from different sound sources can be a problem.

There are four typical patterns commonly found in microphone design. omni-directional microphone picks up sound equally from all directions. That doesn't mean that the frequency response is equal in all directions though. So, it's still best to point an omni directly at the sounds source for the most accurate pickup. The Cardioid microphone picks up best from the front of the microphone, but still picks up a bit to the side and to the back. This provides a more or less heart-shaped pattern, hence the name cardioid.

A Hypercardioid mic is just a more directional version of a Cardioid mic. That means it's even less sensitive to the sounds coming from the sides, but does pickup a bit from the rear. Figure 8 eight or Bi-directional microphones pick up almost equally in the front and the back, but nearly nothing to each side. The frequency response is usually slightly better on the front side of the microphone, so it sounds a bit brighter from that direction. A Figure 8 mic can be very useful when a high degree of sound rejection is required. Let's review these four polar patterns.

An omni-directional mic picks up sound at 360 degrees around it, although the frequency response is best from the front. Cardioid mic picks up in a heart-shaped pattern. While a Hypercardioid pattern is even less sensitive to sounds coming from the side. And finally, a Figure 8 or Bi-directional pattern picks up equally from the front and back, but almost nothing on the sides.