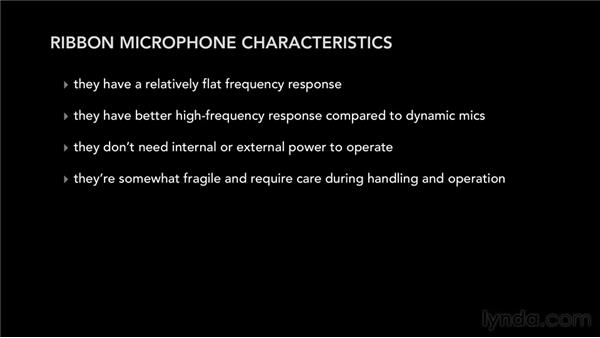 There are three types of microphones and they each have a different design philosophy and a different sound. This means that sometimes one type of mic can work better than another in certain applications. Let's look at the differences. Dynamic mics can be fairly inexpensive, and can take a beating without breaking. If you play live, you're most likely already familiar with an excellent dynamic microphone. The Shure SM58, which has been a sound reinforcement workhorse for 40 years. A Dynamic microphone gets its name from the fact that sound waves cause movement of a thin metallic diaphragm in an attached coil of wire that dynamically moves inside a permanent magnet to change acoustic energy into electronic energy.

This construction gives the dynamic mic its robustness, but because the diaphragm is relatively heavy, that means that it can't respond to sound waves quickly, which means its high frequency response beyond 10 kHz is usually limited. Dynamic microphones have a number of identifying characteristics. They are robust and durable. They can be relatively inexpensive. They're insensitive to changes in humidity. They don't need external or internal power to operate, but they usually have a resonant peak in the mid-frequency response and are weak in the high-frequency response beyond 10 kHz.

There are some common applications where you'll typically find dynamic microphones, such as sound reinforcement, snare drum miking, guitar miking, and voiceovers, and broadcasts. The Ribbon microphone operates almost the same as the Dynamic microphone, but uses a strip of extremely thin aluminum foil as a diaphragm, instead of a relatively heavy coil of wire. This means that it moves quickly in response to acoustic sound, which also means that it has great high-frequency response as a result. The problem is that the foil is so thin that the mic has a weaker output signal than a Dynamic as a result.

Ribbon mics also have a smoother response than dynamics, since they don't have a midrange presence peak like a dynamic microphone usually does. Biggest downside to using Ribbon mics is that they're fragile because of how thin the aluminum diaphragm is. The air blast from a vocal, a kick drum, or even slamming the protective case will pop the ribbon on some mic so fast that you won't even realize until it's too late, although some mics are more immune to this than others. That's why Ribbon mics always have to be used with a little caution, but it's worth it, because they sound great.

Ribbon microphones have a number of identifying characteristics. They have relatively flat frequency response, they have better high-frequency response compared to Dynamic mics, and they don't need external or internal power to operate, but they're somewhat fragile and require care during operation handling, and they're moderately expensive. Typical Ribbon microphone applications include miking cymbals, miking the bass, miking the piano, electric guitars, and acoustic guitars, and brass instruments.

The Condenser microphone works on the same principle as both Dynamic and Ribbon mics, but takes a different approach. All Condensers use two electrically charged plates, one that can move which acts as a diaphragm and one that's fixed, because the sound wave is varying an electric charge instead of moving a diaphragm through a magnet, it can respond faster and therefore have a better high-frequency response and the ability to capture sounds of very quick attack types, like drums and cymbals. Condenser mics come in what are known as small diaphragm and large diaphragm versions. The small diaphragm versions have a single pickup pattern, while the large diaphragm versions have multiple pickup patterns.

The small diaphragm versions also have a slightly lower frequency response, while a large diaphragm versions have a presence peak in the 8 to 12 kHz range, which makes them a favorite for vocalists. One of the downsides to Condenser mics is that since they're electronic by nature, they require either internal or external power to operate. The internal power usually comes from a battery. Many of the old Vintage, Neumann, Sony, and AKG condenser mics actually use vacuum tubes inside, which required a very large and expensive power supply as a result.

Most modern Condenser mics use what's called Phantom power, which can be supplied from all recording consoles and most external microphone preamps. By the way, using Phantom power with the Ribbon mic is a sure way to destroy it. Make double sure that the Phantom power switch is always in the off position when you use one. Condenser microphones have a number of identifying characteristics, they have extended low and high-frequency response, good ones are somewhat expensive. They require either internal or external power, but the large diaphragm models can be relatively bulky and low-cost models can suffer from poor or inconsistent frequency response, and humidity and temperature affects performance.