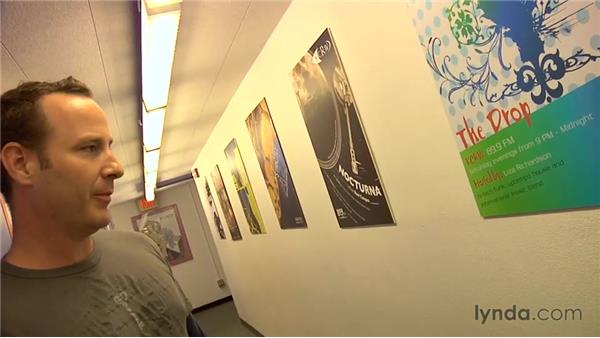 (Music plays.) Here we are in the entrance to KCRW and first I'll direct you your attention to this. Why? What is this? As we come down to the main hallway we have a bunch of studios back here where all kind of production is done. That's a digital mixing board, broadcast standard. We have here the Da-Lite Plus system, which is sort of like Pro Tools. It's an editing system for broadcasting. Over here we have deck players and CD players for production and it's all being mixed, integrated here and broadcast out.

This is our main offices and notice in public radio, nobody has got their own office. It's like this no-frills type of operation, but that's how it is public radio. It's not like, we are not in some Century City high rise. It's-- we're in the basement of a college. What's up with this color scheme is what I'm wondering? Like purple and red, who thought of that? So this is the main hallway for the station, we have a lot of the posters here on Chocolate City, Morning Becomes Eclectic. All these posters are actually done by students at Santa Monica College. It's part of an art and design class where they design posters for our shows. Ah! Here is the poster for my show, formally known as Metropolis and in this case the student artist is riffing on the Bentley luxury automobile.

The only thing I don't like is it doesn't really say anything about the music and that's such an important thing in my program. It's not just about my name. It's about music, so it doesn't say that but it's cool. This is Liza's show. She is formally known as The Drop and she is a great example of someone who is total inspiration to me. She just does this whole like freeform gypsy women kind of DJ thing where she just plays all kinds of stuff and it just works.

It has such a vibe. So it's nice to be around talented people, people that are inspiring you, playing music that I would have never thought of playing, but I can take something away from. So this is the Performance Studio and Master Control is just right through that window. So the artists can see the host of the program and the bands will setup in here. You see we have a piano here. This would be a drum booth to get some separation there and this has been the home of some unbelievable performances.

Everybody, I almost can't even think because there are too many people that have been here over the years. Three- four times a week and there will be a live performance from this room. All right, so here we are in Master Control. I'm the first music program for the evening slot, so we got the stagy old newsies here. You constantly have to think about what you are going to play next. I have three minutes and three seconds to figure that out, but not a problem, I'm professional. Now typically, you want to listen to what you're playing and sort of try and imagine the next best idea, the continuity, and the flow. So with that in mind I happen to know that Jazzonova, group from Berlin, probably have a nice sort of Brazilian musicality to them. So we are going to give this a shot, feel pretty good about it.

In about seven seconds I'm going to make the transition. It's going to be magic, are you ready? That's it. Yes, so that's it. That's DJing 100, very simple.