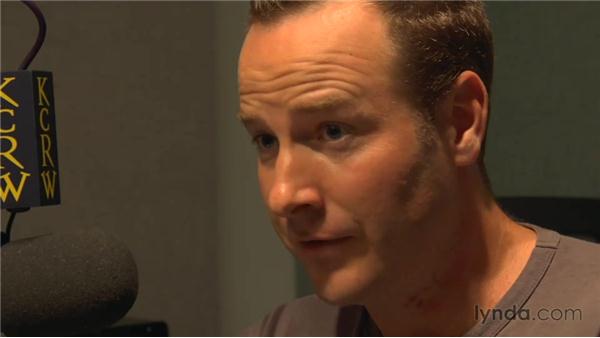 (Music plays.) All right, well normally I get to the station, look at my mailbox and low and behold! Some new music for me tocheck out from North Carolina. See what we got, drum roll... It's Martin Sexton, Live. Hmm. Probably not going to play a whole lot of that but hey, that's the game. And here is something that might be promising. It's XL recordings. This something from El Guincho.

Hmm. This could be interesting. Anything from XL, I mean that's the thing I respond to as I'm looking at who's mailing this to me and if it's XL, then I'm pretty much down. This is from Cornerstone Promotions in New York and they are sending Matt and Kim with Day Lights, Brooklyn's favorite destructive dance duo. I'm in! All right, going to give that a listen to. Toss this stuff and there is today's haul at KCRW. Now this is not inclusive of what I get at home and my P.O. Box. So there is quite a bit more but here's today's KCRW haul.

Well right now I host and produce a night time, a week night program on KCRW formally known as Metropolis but we recently decided to lose all the names of the shows because it was really sounding a little too college radio. Just because there's so many different names. Originally Metropolis meant to kind of reflect the nighttime atmosphere, the mood, the feeling of the city, the urban environment at night and so there's a pulse, there's a rhythm, there's energy and I was just trying to express that.

I mean we are here in Los Angeles, which is an amazing city, very diverse, very cosmopolitan, and it's just capturing that feeling of the nighttime, of the freeways of Los Angeles. I mean we have got a unique audience, kind of a captive audience in Los Angeles, because some many people are in their cars and so that experience of traveling, moving, rhythm, music. I'm just trying to tap into that energy. It's kind of the core inspiration. I think the tagline for the show is 'The Hypnotic Pulse of the City' or something like that.

There's actually a difference in my mind between DJing and programming. DJing is just expression. It's just creativity. It's about reacting to an environment, a club environment or a restaurant or a cocktail party or being live on the radio but it's just pure expression. That's DJing, that's really where the talent of DJing is. Programming is more of a calculation of trying to establish rotations of music, so that there is some familiarity. Because what I'm also trying to do on some level is connect the dots for people based on new music that's coming out, bands that are coming to town. So what I try and strike a balance with is the world of DJing and programming, so that feels like there's a creative energy going on but also I'm hitting on things with some consistency, so that the listeners hear something again maybe a couple of times a week, three time a week. I have really crafted a pretty good ear for the music, so I know what I'm looking for pretty quickly.

Back in the day when we would get vinyl it was like a needle drop. He just, check, check, check, okay I'll play it. Nowadays you just scan, scan, or if it's an MP3 you just, sort of, click, click, click and you can kind of tell if something has promise. Also because I'm totally immersed in the music scene, I'm aware of producers, record labels, managers, the artists, the other elements of how the music is being presented. So you are picking up on other cues that make it easier for you to either get excited or pass on something. I have been at KCRW for something like 17 years.

And then about three-four years into my KCRW show, I get a call from the folks of KROQ. I have been plug-in away at KROQ, just quietly doing my things Saturday nights, mid-night to three. So they don't bother me. But I am in that unique position especially at commercial radio station where again they are not telling me what to play, which is incredibly unique this day and age. Now the real estate of the air waves is just, everything is accounted for, every moment, every song is considered. That's real estate where we are business and we are selling this and so to have my three hour chunk unmolested is pretty remarkable. I do keep it directed at a young male suburban KROQ type audience. I don't really go over to R&B, soul, disco, house.

If it is has that softer more feminine edge then I kinda of, I keep away from that really because I just want it to make sense for KROQ. As far as the feeling of helping artists get a foothold and break, it's definitely gratifying. I like seeing my name in the liner notes and thank you. Groove Armada are good example of lovely guys. They seem to really appreciate the help.

Portishead, where I played, I was the first one in America to play their music and at that time I played it of a cassette tape on air. Tthe album wasn't final. It wasn't finished but I could tell it was something special. Daft Punk, before they were Roberts, they were friends and now it happened on the air here and it also happened at clubs locally. I always like it when I challenge myself creatively some way and take a chance and it may mean running into the music library last minute and you are dashing out of the room and you look at the how much time you have left on the CD player and go, okay I'm going go to chance it, I'm going to do it. And you run and go find a CD and maybe you got the wrong CD. You have to go back last minute and then it's all like last second and it comes together and then you are just like yes! It works. Or it doesn't. But there is that feeling of creative reward that's always important too.