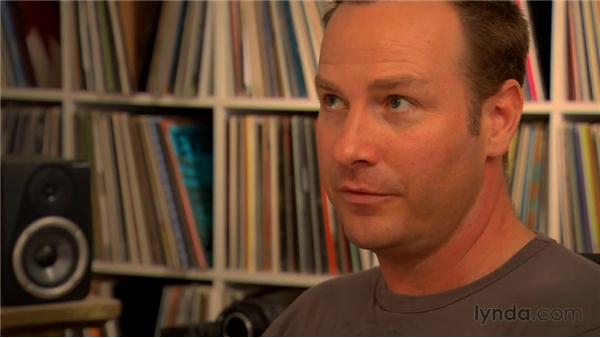 (Music plays.) Remixing music. I have done a number of different remixes over the years. It's mostly for me a way to stay creative and involved with music, more so than DJing. It lets me really get in. But it allows me to use my DJ sensibilities, my taste and my feeling for the potential of a song in a different area.

Maybe a club version or a different version. It lets me apply those skills. The intention of remixes is sort of -- there are a few ways to look at it. One way is you want to take an exiting song, but you want to turn on a whole different group of people to that same song. So you kind of want to take that song into an area it wouldn't otherwise be able to access. For instance, the club scene. And that's why people typically do remixes. They take a song and maybe isn't arranged or prepped or written with a club scene in mind but you will repurpose it for that club. You will give it the sort of required arrangement for a club DJ, a mix-in of 30 second or more, a mix-out, a big kind of kick syncopation to it, four to the four kick drum. But also these days with so many bedroom producers and with electronic music software being so accessible, there no longer has to be such a specific purpose for a remix.

Remixes nowadays can be completely just creative, a postmodern exercise of cutting and splicing and rearranging and mashing up different ideas. So it's a pretty exiting field just creatively because the creative stakes are really high. It's a fertile creative ground. When I get a remix opportunity I look at it as creativity and collaboration and I'll usually call up a friend who is an engineer that I want to hang out with.

It takes a long time. It's really hard work over days and weeks and sometimes you take a break and you come back to a remix after you have sort of put it out of your mind for a little while and you come back with fresh ears. So you need to want to hang out with these people and feel like you can communicate with these people. Also I don't typically want to be in the situation of being the squarepusher on the computer. It's just not what I want to be doing. So like you will notice in my home rig, it's pretty striped down.

It's basically like record-- a DJ rig, you have got this and my microphone but it's barebones. A lot of people are just gear whores. They just have so much stuff and everything and all of the new software. I'm not really like that. So, I let other people do that. So I'll find an engineer that I want to work with and we will go and we will collaborate. I'll be writing parts and we will be working on stuff and it is very collaborative. Like I'll write part of a baseline and maybe my guy, the engineer will be like, let me try this, let me try that one time boom, boom, boom and I'll be like, yeah, yeah that's cool, that's better.

We work in either Logic or Pro Tools or both. Sometimes you do a lot of the writing in Logic and then you do the arranging and the editing and a lot of the effects in Pro Tools. Then I have another person who will master it and give it that final sort of finish. So it is truly collaborative but I'm not saying that I work solo, alone on a computer and write it and do all that stuff. I really do collaborate with people.