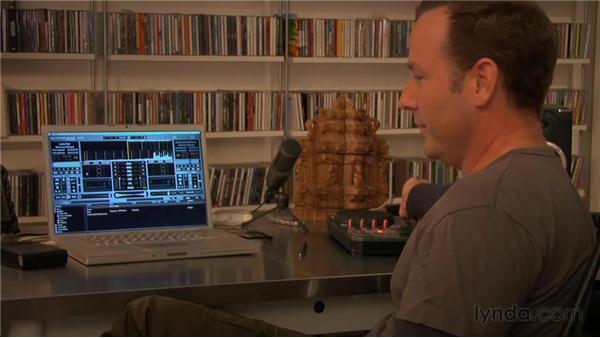 (Music plays.) One example I want to play for you was a local band called the Silversun Pickups. They wrote this song called Lazy Eye, which I just fell in love with. It kind of reminded me of classic Smashing Pumpkins and it has a really distinctive guitar line which pretty much exists throughout the track and in fact it starts the record. And it was something that I also start my remix with, but in a sense you'll hear the original and then when you hear my remix, you can hear how I start the same way, but then it's a departure and you realize, okay this is a different version.

I wrote new drums, new synth parts, a whole different sort of a vibe. So first I'm going to play the opening and the first couple seconds of the original version of Lazy Eye by Silversun Pickups. (Music playing.) One thing I really love about this song is it's over five-and-a-half minutes long which is definitely not standard. Most songs are a neat three-and-a-half to four minutes. Just the commercial world has sort up tuned them into this timing.

So it shows that they didn't write it with radio in mind. They just made a great song, so I love that. But there is a part in this song where they just completely go out into left field with feedback and guitar loops and everything. Okay, right here you just hear the feedback building and then the guitar is surging and the drums and it's just intense. (Music playing.) I'll skip in a little bit. (Music playing.) And you just don't really hear this type of a thing on radio anymore, where a song is just -- Stairway to Heaven or something, those are great songs, and they have let the song exist and build in the dynamics but you don't hear it as often.

So I was definitely captivated. So here is my version. I kept the same opening but you will pretty quickly hear certain synth parts coming in, introducing more of a dreamy effect and then the drums are totally different drums, I rewrote the drums and so without further ado. (Music playing.) See like little weird synth parts? (Music playing.) Much louder drums, it's a rock pattern.

It isn't like a house kick drum. It's a rock two-step pattern but it's syncopated so that you can mix in. So it's sort of DJ-friendly and club- friendly and then I wrote a big synth baseline here, more reverberance. (Music playing.) So you can tell that it's the same song. I mean it's not that much of a departure and that was where I calculated. I wanted people to know this is the same song. (Female singing: I've been waiting for this moment, moment, moment, moment....) I use the vocal, I chopped it out, set it into a delay. One big thing about club records and remixes is that you are really trying to sort of play with peoples heads and trip them out a little bit. So that's why I'm using the vocal, throwing it into reverb and so I'll skip ahead to the area where I'm trying to in a way engage the psychedelic nature of the original, that part that I played for you a moment ago.

So the track is firing along and then I just drop it out. It just drops out and builds up again. (Music playing.) That's a whole synth pattern, the FM7, just this arpeggiating rhythm. But I'm kind of trying to do the same thing with electronics that they are doing with electro guitar, feedback, drums in a rock sense. I'm trying to do with electronics, building a surging feeling and then I actually come back to their drums. So you'll hear their live drums.

(Music playing.) So see that's them. And we haven't heard their drums in my version up to this point. So all of a sudden we are kind of back to the original. (Music playing.) So anyway that's the Silversun Pickups. You should have seen this session. When I got their original recording and opened it up in a Pro Tools and I mean it was the most intricate session, multi-tracks like you would not believe, vocal effects, the craftsmanship of that production was pretty, pretty impressive and my position was I didn't want to take it too far out. I wanted people to hear that original guitar line, I wanted people to hear the vocal, but it was just taking it in a new sort of a dance and electronic direction.