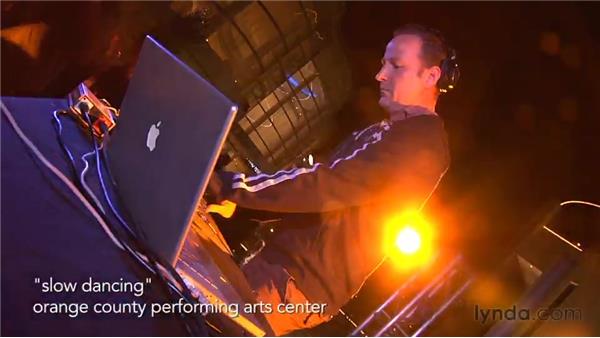 (Music plays.) So as far as the music community in Los Angeles, I really feel like we have it very good. We have all the best talent in all the genres will come through Los Angeles and so we're spoiled. We got the best of a world of music and so we have got the festivals, we have got the nightclubs, we have got a bar scene. So, it's all happening here. I hope people appreciate it.

I have made it my cause for years. My cause has been the electronic music scene and dance music scene because I see something so important and powerful and transformative in the dance music world, apart from this sort of rock and roll system of touring and ticketing and go sit in your seat and you adore this pop star, I get it. But dance music to me is so much more empowering to people.

You go out and you are the source of the energy. You are the star and the potential to meet and connect and see different people from different parts of the world, which is really exciting and has always been the part of my whole movement. When it comes to picking and choosing the gigs that I play, mostly people have to find me. I kind of make them figure it out how you are going to get in touch with me. I'm not actually soliciting DJ work. I don't have a manager, I don't have a booking agent, and nobody is out there knocking on doors asking to book me.

I was the first DJ to play at the Academy Awards. I have played the Emmy Awards after party two years in a row. My point is that I'm doing something right in terms of visibility but I just think that you have to get it. You have to know that you want what I do. Last weekend I played an Obama benefit with Hillary Clinton speaking and Bon Jovi playing and I'm DJing. Like, what?! In a couple of weeks I'm playing the HARD Festival which is with Justice and Soulwax and Simian Mobile Disco, like the freshest, edgiest, hard electro rock, like underground, kids, just rabid kids.

I do play at various museums and cultural institutions around the city. Mostly it's linked to current exhibitions and them wanting to draw a new and younger audience to appreciate the museum. It's not easy to bring a club into a museum. So there is always little bit of a disconnect. But it's more about an experience for people.

So to be able to play such a wide range of things, I think the bottom-line is that no matter what little scene or community you are from, I think people just appreciate that, well, I have got great taste and whatever it is, I'll be playing some good music. Its also about being put into a situation and trying to solve that puzzle in terms of, in a very subtle way, what's going to unlock kind of the energy or the potential of the room and I'm always looking for signs from the audience.

It could be that guy way in the corner. He just tapped his foot. Okay, I think I got him. And you are always looking for that reaction, especially in situations maybe it's the opening of a high-end restaurant or a cocktail party or political event or something where it's a little more difficult to solve, how do we figure this out? How do we take these people somewhere? It is kind of this musical journey you want to take people on. We are in a great position because people trust the brand of KCRW. So to a certain extent they are going to go out to things just because KCRW is part of it.

So that gives us an opportunity to present a lot of unknown talent, talent that as a standalone maybe people wouldn't go see it, but as a KCRW show, people give it a shot. So we take advantage of that, especially at the Hollywood Bowl where we do a world festival and we will mix and match groups that would never play together and almost speak to completely different communities normally, but they can all come together and I think people appreciate that and I also think that people buy tickets for that series without even knowing who is on. They don't have to know.

I think really a lot the festivals that have come up in the last five to ten years have taken the cues from what we have done. This eclectic kind of formula and being able to say like, you as a listener, you can handle it. You have got an open mind, let's give you credit. You see that festivals have done over the years, things like Coachella, there is such a huge range of music on those bills now. That's kind of the thing to do is present more of an eclectic format. So, yeah, we have got nice crop of music and genres colliding and music scenes, very active, very fertile.