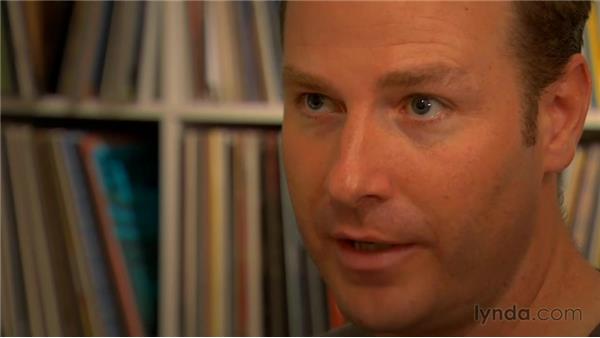 (Music plays.) Music supervision came about for me as an extension of DJing because I was on the air and being on the air in Los Angeles, I mean that's -- this is the entertainment capital of the world. So you are really speaking to writers, directors, producers. So I started to get calls from people looking for help in music direction.

Music supervision can really mean a variety of things; it can be anything from placing existing songs in a project. So in a way kind of DJing to a scene or a game or an advertisement but it can also be overall coordination of score, hiring a composer, all of the aspects of the recording of that score. So it can be very, very hands-on or it can be just almost all in postproduction but ultimately you are serving this project and you also have to let go of whatever agenda you may have individually. I come to the table with a lot of contacts and a certain aesthetic and a certain skill-set but ultimately you need to have the open-mindedness and versatility to serve that project and even if you favor certain people's involvement, certain composers, you almost always just have to insulate yourself from that kind favoritism.

Also if you are going to have any longevity in music supervision, you need have the versatility that I'm talking about, an ability to adapt to different projects. I kind of have a reputation in electronic music and dance music and because what I have done on radio, but I have really actively tried to work outside of that box as well to show people that I can work on projects that aren't exclusively electronic. So that's important.

I have been on projects where I have worked really well with the director and then we have submitted our work maybe over a month or two to the producers and the producers have said we don't like this, start over. And then the director said, well guess what? I'm out of here. This is my director's cut, see you guys. I have realized that that is the norm. People think, oh, well the norm is probably a very smooth sail. Well no, the norm is that anything could happen. Things don't work. You are unable to clear songs that you're really counting on.

It's wild ride, supervision. It's not easy. A lot people come into it thinking oh, yeah I can do that. Similar to DJing. Well sure, DJ. Sure, I can do that. I love Djing. And then the reality is you have to be really tuned to the situation and the people. I have in recent years worked with Lexus and Reuters and Jaguar and all these sort of -- Microsoft and all these corporate brands where they want to use music and the power and the magic of music to strengthen their brand. So they look to me as a taste maker, as someone who has relationships with all of these people but also has the ear for new emerging music and they want a piece of that. They want that taste to reinforce their brand.

So it's easy for me to spend half or more than half of my time really as an extension of my work in radio. I'll be playing music on the radio at night and an idea will come to me, oh, this should be perfect for that Microsoft project. I just thought yeah, this would be perfect. Or I'll be opening up mail at the station and it could just as easily relate to playing on the air as it does a project I'm working on.