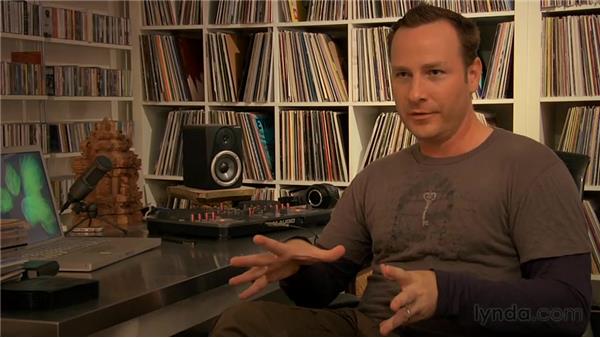 (Music plays.) When you have a complete film, even a rough cut, you sit down with the director and the composer and you spot it and you are essentially, by spotting it, you are starting to develop a queue sheet, which is the very specific mapping of a film for everything, from score to source. The source meaning a song that you would put in there, maybe it's back ground music, it's something playing on the radio in the background of the scene. You have really got to map all of that out.

I usually pitch three, four different ideas to the director for a particular scene. I don't want to pitch too many things, because you almost want to guide the director. So, you've really got to go in pre-clearing a lot of these ideas, because the problem is that if you play something and the director loves it, then you are screwed. Because it's something that is called temp love and often times directors and their personalities, they just, they don't want to hear no.

And so, they will get stuck on something. They will just be trying so hard, because they will like that idea. So don't play it to them, don't show them unless you can clear it. So it is a balance between the creative inspiration but also the ability to actually make it happen. The highest profile project I have worked on is the Matrix Trilogy. So that was a great example of really learning the craft of music supervision because for the first one, I came in when the film was in postproduction. So, the film was cut. It was done essentially and my job was to fill these gaps with songs, to liaise with a record company to create a soundtrack and also fulfill the director's interests.

The directors really only had two specific requests. They wanted Rage Against the Machine at the end and they wanted, there was one other. Oh! They wanted the Prodigy. That was it. Those were high ticket items, by the way. Those were expensive licenses, just knowing the profile of those bands, but it was all postproduction. The film was done. I didn't know the Wachowskis prior to that and I was sort of thrust into this situation and ironically, the soundtrack got a Grammy nomination and all this acclaim.

The film did really well, obviously, too. It's just funny, because it was just slapped together, with all existing. No songs were written for the film. I didn't have time for any that. It was all just throw a bunch ideas at that and just see what works, figure it out and make sure that we got Rage, make sure we got Prodigy and just get it out there. And then some how that just really resonated with people. So that was good. Second one was more being involved in whole process, even being on hand during the shooting of certain scenes like when Morpheus is talking to Zion and playing that music and there is this elaborate dance sequence, futuristic tribal dance sequence and I actually DJed to the set for the whole dance.

I have played the demo version of the song, which alternately made into the film. So with the second one, I was very much a part of the process and working much closer with the composer and the overall picture. And then the third film was all scored, but the goal there was to actually try and develop a collaboration between the composer Don Davis and various electronic people. Juno Reactor is one example where we really put them in the studio together and we said you guys, come together and create a hybrid of score and orchestration meets Sci-Fi tribal electronic.

The results are on CD. You could check them out. The third disk, there is no popular music there. There is no Rage Against the Machine, there is none of that. The third disk is a pure score record, but the intention of it was that it's a score that's integrated into a futuristic electronic sound. I'm working on the sequel to Tron, the Disney cult film from 1983. That's going to be a big focus of mine for the next year and a half, two years.

There will also be a lot of ancillary properties, like video games and all kinds of things. You can imagine the marketing that goes into that. So really, music has to seep down and touch all of those things. Whatever we establish as the core themes need to really take root in all of these other properties that they create. It's huge project. I'm excited, I'm nervous, but I'm really pleased to be involved. It's a good group of people and I think we are going to do something incredibly special.

I feel like we are on the cusp of something that's going to really impact popular culture. So just like we appreciate the original Tron 25 years later, I really feel like we are going to do something so special and people will think back and go yeah, yeah! Tron, you remember Tron 2? Yeah, so we'll see though. Fingers crossed.