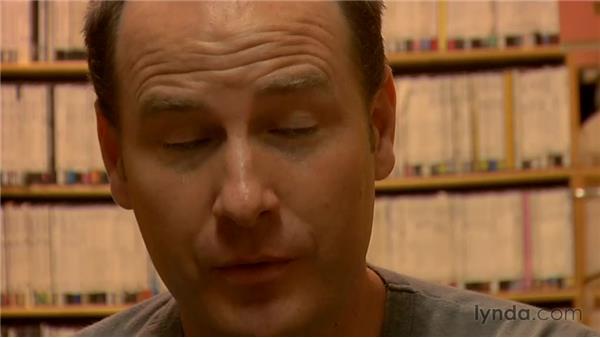 (Music plays.) Moving into the music library for the radio station, which is the hard work of many people over years and years and years. And you see the wall is double thick, lined with CDs and that's just one wall. Usually what I do when I come in first is to check what's new each day. The new recordings are posted and so I'll see what's going on here. We have got the new Keane album, got a record from Herbalizer, Amp Fiddler.

So some pretty good stuff and all of these new releases are basically in this area of the library, so it's easier for me to access the new stuff as compared to everything else that's come out over last 25 years. But when I do want to access something that's come out over the past 25 years, they are all here and they are organized in the drawers. We have got everything from Jill Scott, Nitin Sawhney, Sea and Cake, Seal's greatest hits, Sebado; and this just the SC through SE.

And yeah, tons of vinyl. Not everybody plays a lot of vinyl but some of us do and we have got turntables. So it's not a big deal. So yeah, down here is the other world of jazz, Charlie Mingus. This is African music here. We have soundtracks behind here, a lot of stuff. I usually come in 10-15 minutes before the show starts and just get a bunch of material together and the reason of why it's not more time than that is because I'm doing so much radio through the week.

I mean just remember I'm on the air six nights a week. So it's really a constant and I can take advantage of that, use that as strength. It's not like I have to produce one show a week and I want to make that show so distinct. It's more like just a constant flow of adding new things, checking out new things and really I'll go directly to the new music section, the new CDs and I'll just start to go through that and it's really new to the extent of probably four or five months.

So it's still lot of music and that's my starting point is what's new and that will often times make the connection to something that's older and I'll come back and pull that as well. But a lot of what I do is what's the latest thing. It's really impossible to know everything, but over the span of 10 or 15 or 20 years you become familiar with the lot of great stuff. And sometimes I'll just go through an exercise of maybe doing an hour or maybe a whole show will be without any preparation and I'll just have to come out and get one of these drawers open and just pick some things and just do that unprepared, unrehearsed exercise.

It can be really refreshing and sometimes you just get into it right off, especially as often as I DJ and that's part of the discovery of the music library and what it offers is that no stone is left unturned. It's all here for you and whether it takes a couple of months or a couple of years or whenever, it's here for you and it's yours for the exploration. So, it's a great working environment I would have to say.