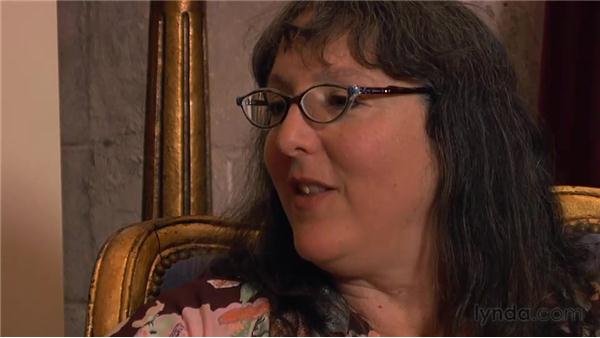 (Music plays.) Lynda Weinman: Welcome to Creative Inspirations. I'm your host Lynda Weinman with lynda.com and I'm very pleased today to be interviewing Jason Bentley. Jason Bentley: Thank you. Lynda: How do you like to be referred to in terms of a title or describing what it is that you do? Jason: Yeah, I mean you are correct. It's pretty broad, more than simply DJing but I do like DJ because there is the implication that that's a figure that as a tastemaker presides over different media, ideas, culture, a curator but I really like the idea of being a Renaissance man in music. So it's a lot of things.

Lynda: I was struck when I was listening to some of the footage that we have already shot of you that as you are doing mixes that you are also a musician. You are really more than a DJ and I wondered if you had any kind of musical background and how you trained to do that sort of music? Jason: Well because I have such a high standard on the music that I play as a DJ, I also put myself to that high standard. So I'm not so quick to call myself a musician. I don't necessarily have a background. I have a love for it and that passion for it, but the nice thing is it always comes down to your ear and even if I'm in front of keyboard and I'm making my way fumbling through a melody, its still about what your taste is and what your ear is responding to.

So even though I don't have a traditional training in that area, I can still work through an idea. As far as my work as a composer, slowly but truly I've really tried to do come around and be confident about it, but again that I have such a high standard that I can't just put it out there and say, oh this is what I do and it's music and it's great. I just always, it has to be as good as everything else that I'm playing, if that makes sense at all. Lynda: It makes a lot of sense. What I mean is I think most artist of any genre are self-critical of what they do.

Jason: Yes, and it can be a painstaking process, just letting that out because I have so much respect for that creative process. I mean I have really made a career on being an editor and an a filter of that. So over time, I hope to let loose it a little bit more and feel more confident about it but I'm very cautious about that part of my personal expression. Lynda: Do feel like the digital tools have opened doors for you that wouldn't have been opened before? Jason: Definitely. It makes it more accessible, but also the remix has been an important stepping stone for me because when you think about it, with a remix people aren't doing it for any other reason but creativity. There is no directive there is no major label, there is no manager. People are just trying ideas and so that kind of unfettered creativity usually results in some pretty exciting ideas. Sometimes it's objectionable, maybe there are copyright issues and people have all kinds of problems, but that only comes into play when there is money involved and if it's something that's just put out there, perhaps through the internet or a limited edition release that is only on promo.

So there is no sales, there is no money being generated, usually people look the other way and they appreciate at us as just creativity. I mean the truth about music is, as music in song is a tradition that humanity really owns. It's not something that necessarily needs to be commodified and given a price tag really. I mean it's about tradition; it's about an oral tradition. So hopefully there is some respect for passing down ideas, connecting things and of course with technology allowing so much more power over that process, I hope that people are okay with it and they see the importance of it.

Lynda: How have you seen the iPod and the ability for people to make their own mixes and order their own songs impact the DJ profession, let's say? Jason: Well the DJ booth has certainly been revolutionized. The old system was turntables, CD players, a mixer which allowed you to bring up all of these different sources and play them at the same time or mix from one to the other and now all of that is out, which is quite a revolution. Now it can be a laptop and perhaps a little piece of outboard gear, the software program lets you look at all of your music, your MP3s, your WAVE files and bring them up and mix them and you can do everything that you would be able to by putting vinyl on a turntable platter.

So that's a revolution within the DJ boost. As far as mobile technology, people downloading music, hopefully it will save the record business, which obviously has been in recession for some time. Now there are new ideas where when you get your phone service you can opt for music and then you have access to millions of songs and you are just paying a little extra. So everybody is looking for other ways to bolster the economy in that area and I don't think it has really become clear yet, but there are some strong signs that the industry will be back but we do know that CD sales, physical CDs are really in decline. So change is eminent but hopefully the mobile technology will give a nice boost.

Lynda: Do you find that there are aspects that you prefer about everything being digitized at this point and searchable and do you prefer this new way of working over the old, having the LPs, or are there sort of some visceral things about the old ways too that you missed? Jason: Recently I went through my record collection and I was trying to thin it out and maybe couple thousand records just get rid of. I realize that you just pulling out the vinyl pieces, you flash on a memory that's very real and digital will never take the place of that. You remember a time, a moment of time that I played that record in, the smell of the vinyl, my fingerprints on the record. That experience will never be replaced by digital.

The advantages of digital are-- my lower back is very thankful. I can bring weeks worth of music to in a backpack to a gig and it's unbelievable. I used to have these two crates and I would put them on a hand truck and I would take that everywhere. So daily I would be loading up at least twice or maybe three-four times, loading up a hand truck and going across to whatever destination, the radio station. I can't believe that that's how I did things before. So the digital revolution has been fantastic in other ways and I'm happy to adapt. It has been good but sometimes when I look back, I do miss the vinyl and even then just feeling it and touching it and smelling it, there is something special there.

Lynda: All right. Are you still going out into the clubs and discovering new facts and new talents and are there any trends that you are excited to discuss? Jason: Yeah definitely. Well lately, it has been a really nice fusion of rock and dance energies and perhaps reminiscent of the 80s when things were maybe less categorized the way that they are. It's going to return to just a refreshing fusion of ideas and perhaps technology has allowed for this too, because technology can put ideas on a grid and put them together in ways that maybe weren't possible or thinkable in the past. So you have a little bit of country and you got a little bit of rock, and you got a little bit of hip hop and so all of that is easily done.

But yeah, the most interesting thing to me lately has been a real rock and dance collision where things are syncopated, things are on a rhythmic grade and a rhythmic energy but they have an attitude to them. That's just sort of one trend we are seeing lately. Lynda: Well I want to thank you so much for being a part of the interview. It has been wonderful. Jason: Thank you, Lynda. I appreciate it. Thank you for thinking of me and I hope people find it compelling and interesting. Lynda: Sure they will. Jason: All right, thanks a lot.