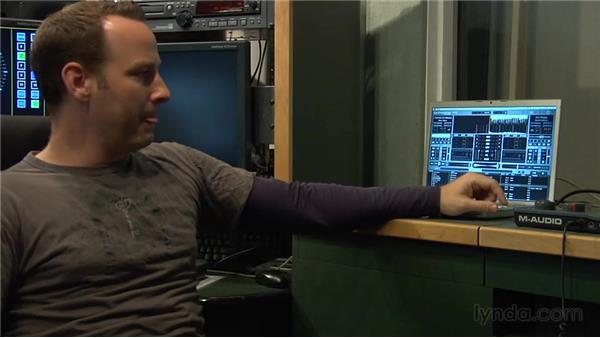 (Music playing.) Underneath here is a voila! Is a DJ rig, turntables, some mixers and I can use this at any time but really I just take a line from the DJ mixer and make sure that it's live and I'll use this line for my digital rig. It's a variety of components but mainly it's the laptop. Of course I wouldn't know what to do without this little puppy. Hard drive. Here is kind of a mixing unit, which-- this represents everything happening on the laptop. This is kind of a preamp unit that I use. It drives the signal, controls the queue.

So now I'm essentially ready to go. This is all I need to DJ. Once I launch the software, we are set. I'm here in the control booth at KCRW. Now, what I typically set up to my right when I'm facing the board is my laptop and on this I run a program by M-Audio called Torq and it's basically a DJ software program that's an interface for the organization and the playback of all of your music.

It could be MP3, could be WAVEs, it could AIF, AIFF files and you can see on the monitor here that it essentially represents two different decks. It is sort of queuing up two separate either, in the real world it would be CD players or turntables on each side, and then there's a cross-fader in between and there is volume control. There is EQ control so LOWs, MID, HIGHs. There is GAIN up top.

You see a visual of the waveform, which is really helpful, and they also break the waveform down into more specific counts. So you can get a sense of the tempo. Actually it also shows you the tempo. This track I just queued up is 134.5 BPM, Over here is 69.4 BPM. If you want to just go based on BPMs of records you can queue up things that have some more BPMs and then they make it easier for you to mix them. If not you can control the pitch. That's what a normal DJ does. You adjust the tempo of a record by controlling the pitch.

So one of the benefits of this program is it has a browser. I'll even expand the browser here and it looks at all of your iTunes organizations. So you see the playlists that you have created and all the music and as you can imagine, these playlists like Recently Added and Recently Played for me is really helpful because I can just go to that library and check out what I did I play last night or what I played two nights ago? So keep that rotation going or add to the pool that's recently added.

Well when I first started it was basically the turntables, which are now hidden under this counter, and the CD players and so that was it. The digital revolution came along and just completely changed a lot of stuff but really I think for the better and it expanded the horizons of what was possible, makes things more accessible. In theory I could go online and buy or download somehow a song, any song right now and rack it up and play it minutes later.

The fact that I'm online now or maybe someone can send me a demo as an attachment in an e-mail and it will come right now and I can turn around and play it immediately. So it's amazing how much it has done for just the access of music and not just locally but globally. There's really no limitation. So, I don't know how many other DJs are actively using Torq on the air. Some of them are, I don't if they have total confidence in using a laptop to broadcast and they would much prefer something that they are familiar with, which is just queuing up CD's and going in that direction. It's totally fine. But this is the way that I do it and I really do look to the laptop for-- 90% of the program is being mixed out of this and it just runs straight through board.