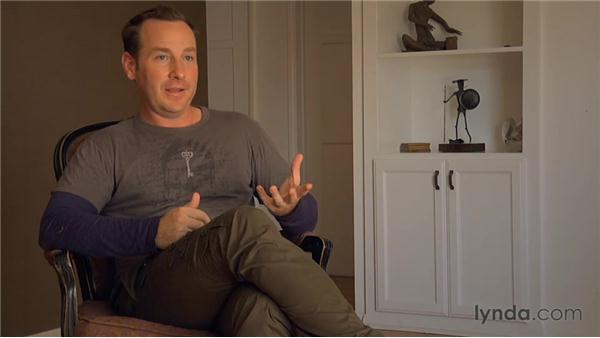 (Music plays.) Growing up in Boston, Massachusetts, I actually had just the classic East Coast to urban environment and when I was 13, I was transplanted out here to Santa Monica. All of a sudden I landed in a very homogeneous world, sort of yuppie, wide upscale West Side and Boston is like this great East Coast melting pot.

So I really attribute a lot of my creative direction and career path as ways to find the urban aspect of Los Angeles. I found that in the club scene and that was something that I just was really drawn to. That's been my British invasion, my punk rock movement, you know things that other generations have experienced. My movement has been the club music explosion and the power of that moment has been so profound. People coming together from all walks of life, the power of dance and bringing people together from different worlds, all that is just really important to me.

So that's kind of the promise of this underground music. By the time I got to college, I started to really do things more pro-actively like getting involved in college radio, writing for music, fanzines, and going out to events and putting together my own events. And without really a plan as far as a career. More doing things that were fun, felt good, hanging out with people who were like minded. I would find these places where I could just be immersed in that world. Those are the days when you are just doing things that feel fun and feel all right and you are not overthinking it and you don't really know where it's going take you. I certainly didn't know that 15, 20 years later I would still really be doing and touching on the same ideas but I am and I have been able to carve out a career and a reputation.

Initially, as far as the record business, I first took my jobs in the record business to really to pay for more music. That was my scheme was I work for a record company to pay for the records I want to buy and so my first job was as a A&R Scout for London Records out of New York and I would basically send them cassette tapes of my favorite new music that I was coming across. That was my role as a scout. I started the label called Quango for Island Records. I worked with them for couple of years and then amicably split to pursue my next position in A&R, which was with Madonna's Maverick Records.

So there I think the most significant thing to my credit there was doing the Matrix soundtracks and also seeing the dismantling of the record business because when I first came into Maverick it was still the heyday of the business, big money was being spent, promotion budgets, marketing budgets, everything was just flush. And by the time I left it was just crumbling, the whole business was crumbling. So it was an interesting examination of the decline of a business model.

Then after Maverick I kept pursuing my music supervision things in film and commercial advertising and video games and that's pretty much where we are now. I'm still doing radio six nights a week on KCRW, on KROQ, and I'm taking all of that emersion in the music scene as a DJ and as a tastemaker and applying it to various projects. I always try and make sure I have a creative outlet in some way and it sorts of feeds me, it feeds my process and so remixing is part of that because it allows me to get that much more into the music and closer to the music.

My discipline is putting the pieces together as a DJ and having the ear and taste and the vision to put things forward. All of that is a talent but all I'm saying as I'm not your traditional musician. But remixes allow me to take that whole skill set and apply into a song. Look at a session, open it up and just be creative in terms of how I want to interpret that. It's really strangely the same thing that I really set out to do as a young man, which wass just being excited about music. That's whole feeling when you go to the record store and you are excited about discovering something.

So I think that same feeling exists in all of the things that I'm doing. If I'm placing a song in an advertisement or in a film and I'm making a difference for a band, if I'm helping to break an artist at radio. All of these little things, it just makes me feel that I have purpose in a way and that ultimately is all I need. I really just want to be able to look back and have a sense of purpose in the world. That would be satisfaction to me.