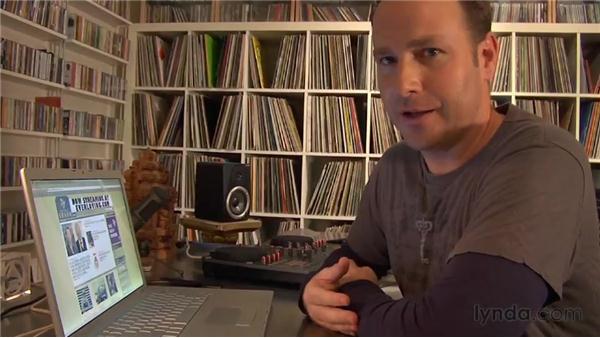 (Music plays.) Okay, so here are a few resources that I typically use in getting new music and finding it online. The first is beatport.com, which is a great resource for DJs. Basically that's a record store. They've got a lot of different ways that you can filter through the music. You could also go to a specific playlists from different DJs around the world and I'm talking about a lot of different DJs. There is a lot of music here that's specially tailored for club DJs and people who love techno and drum & bass and house music and trance and all of that. Beatport really does a great job.

But I wanted to go to another website. This is more of a blog type of format. It's called Record Label. They put forward more of a vibe, an aesthetic scene, but what I love is they write about all the music, they give you all kinds of links, they make it fun and exciting in terms of your experience and all the music is free. So it's sort of an ad- supported model where the music is free but you just have to deal with their sponsors. It's all cool. I love what they are doing. Here is a Meat Beat Manifesto remix by Lee Combs, and I mean this is good.

This is good. You feel like you are reading a magazine, but you are also at the same time getting free downloads from this magazine. I often go to this website called thedailyswarm.com because it basically aggregates news stories, but they have edited together the types of news stories that I would be interested in as a creative executive, as a DJ, as a festival concert goer, as an electronic music fan, they are kind of on the same page somehow as this Daily Swarm. It's all just to have a better view of what's new and what's fresh out there.

All right so this is my CD collection. It's organized fairly well, so it's a working music library for me. Whether I want to pull out something from the Clash or music from Fugazi but it's really 15, 20 years of real, active music collecting. Moving down here, you can see the start of the vinyl and unfortunately this isn't as well organized as I would like it to be. These are primarily import dance singles and EPs from the late 80s through the 90s and through with this decade as well.

Every single has a story and sort of has a memory attached to it and so it's just great. It's like each thing you flash on a period of your life when maybe I played this or I just love that record and so it's just cool to spend a few hours going through these tracks. Here is music from David Holmes, who is an Irish producer and composer, and I'm actually playing his new album right now on KCRW. And I just love vinyl. The feel of it, the smell of it, you could even see my fingerprints on the record from way back whenever I played this.

The task is really that I need to digitize all this stuff since I'm so completely digital now. I have really got to be disciplined about recording some of the stuff and I don't know how I'm going to do that. But eventually it will happen. All of this will be in a computer.