Fading an LED with PWM with code 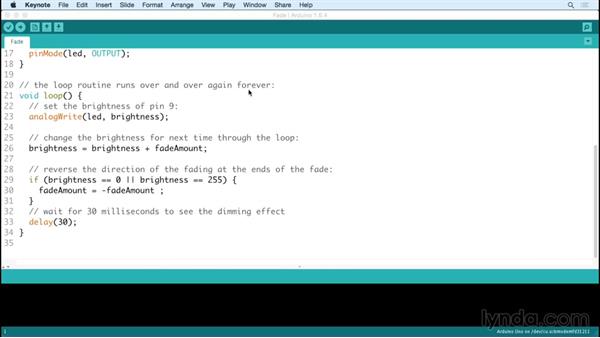 - [Voiceover] In this next example, I'm going to use the Arduino to slowly fade an LED in and out. In the Arduino I-D-E, I will select file, examples, basics, fade. With the use of the analog-right function, I can adjust the brightness of an LED. By keeping track of the brightness and slowly adjusting that value, I can make an LED fade in and out. In this program, three variables are declared. LED, brightness, and fade amount. In the set-up function, pin mode sets pin 9 as output, which, as I mentioned earlier, is unnecessary, as analog-right can handle that declaration.

So the Arduino again swaps the sign of the value, setting the fade value back to five. This happens over and over again while the LED fades in and out. When I upload and verify this code you can see that the LED gets brighter and dimmer over time. Because this is happening in the loop, it will continue to execute until the Arduino is unplugged. Back in the code, I'm going to change fade amount to 10. I also need to change the upper bound of the if statement to 250.

Otherwise, the statement will never execute as true. Now, when I reupload the code, you can see the fading happening faster. I'll change the upper bound back to 255 and now I'll set the fade value to one. When I upload this code, it now takes the LED longer to fade in and out. However, when it fades all the way down it takes quite a while for it to turn back on.

This is because the LED appears off around the value of 100. So I'm going to set the lower bound of the if statement to 100. Now, the Arduino will not count down lower than 100. The LED still fades slowly, but only remains off for a few moments between pulses. 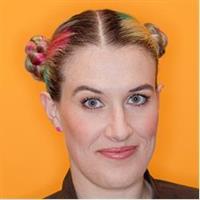 Video: Fading an LED with PWM with code