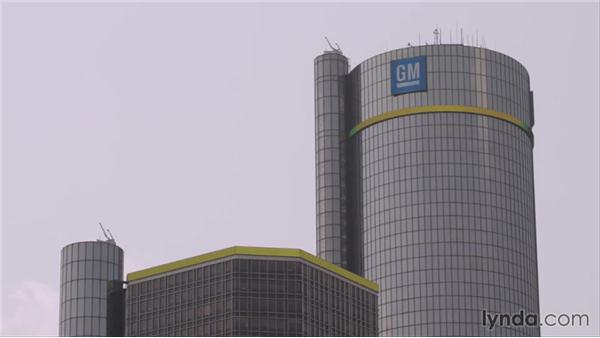 Join Gary Hustwit for an in-depth discussion in this video Phoenix to Detroit, part of Urbanized.

(soft music) From the beginning of recorded time there's been this vacillation between the desirability of living in the periphery of the city and then living in the center. (soft energetic music) After the war suddenly, we began a pattern of development that was absolutely based on sub-urbanization.

Getting out into the suburbs with a car was considered a tremendous step up from, what at the time, was perceived as over crowding in the cities. The American dream was home ownership and ones own little piece of dirt. Defining sprawl is a little be like defining pornography, you know it when you see it. There is no consensus on any one single definition of sprawl.

But as the basic process of sub-urbanization has been continuing, we've been getting more and more of these massive developments, by large home builders where every house is the cookie cutter, looking exactly the same. Multiply that by having all of the chain store retail, where every single big box store looks exactly the same. More and more cars that require us to drive much longer distances, that's when people really start saying this is now, sprawl.

This is not just, suburbia. The main negative of sprawl, as it is used as a pejorative term to me, is it spreads everybody out over a larger area of land. And eats up the bucolic rural villages of Vermont by overrunning them with subdivisions. And that, that would be a better lifestyle to preserve. So there's a perception, if you listen to NPR, that sprawl is always bad and Phoenix is a poster child for bad sprawl.

But Phoenix is not a city where we're taking a high density population and redistributing it at a low density. We're building at the same density we've always lived at. Nor are we over running rural pastoral landscapes. Now, we are eating up desert and the desert is really beautiful here and really important and we tried to learn a better way to develop in the desert but I don't think this is a poster child for sprawl. This is a poster child for an automobile oriented post war urban fabric.

This is what you get. You're not buying the, sprawl is always bad, density is- No, you know, here's the deal, I mean lets be honest I live on a three quarter acre lot and I like my backyard and I like my swimming pool and I think living in a condo would be cute and interesting and I'd like to do it about two months out of the year but I like the way I live, so there you are. That's what it's really about at the end of the day. (breathy chuckle) Cities are extremely dynamic organisms. Throughout the history of the world we've watched civilizations that bloomed and then collapsed, and similarly we see now amongst our cities and our suburbs.

Some of them are growing and are still booming and more and more people want to live there and others are shrinking. (soft wandering piano music) Detroit was once two million people, and a metropolitan area that really was the center of industrial production.

Not just in the United States, but in the world. The city has shrunk back to about seven hundred thousand people. The city of one hundred and thirty eight square miles. You could fit Boston and San Francisco and Atlanta inside the boundaries of the city of Detroit. It's that big. So when you have seven hundred thousand people as opposed to two million people, you've got to scale back to you neighborhoods and your areas where there's concentration. Where there is this livability and urbanity.

My grandmother bought the house we're in, in 1969. When I was a kid it was like a village, you know? We had car dealerships, clothing stores, bars, lounges, theaters, restaurants, everything you could imagine, you didn't have to leave the neighbor hood. You just had everything here. And it just, people picked up and moved away. And now, we got a bunch of vacant lots in our neighborhood.

In 2008 I came outside and saw a bunch of garbage and stuff on the curbs, in the lots, that's something I never saw in the neighborhood and I wanted to do something about it. Being out here cleaning up, we're able to talk to neighbors, people were coming up to see what we were doing and we found out that some people in the neighborhood, they're choosing food over medicine or medicine over food. So we started a community garden project. It kind of turned into healthy food choices, cheap food because we were giving it away for free.

And we got the hot peppers, two beds of okra, in the back corner is mustard and turnip greens. We have thirty one raised beds for vegetables. Then across the street there's two vacant lots that we did a orchard. And then across the street from that is our community center. And then down the street we have two more community gardens. The guy that just walked pass, his brother is twenty two or twenty three years old now, the first time he saw me taking carrots out the garden he said, "Are those carrots? I was, yeah. "I didn't know carrots came out the ground." I was like, where you think they came from? " Out the bag!" Like, you're kidding me.

You didn't watch Bugs Bunny? (laughter) We don't own the lots, the city owns them. But other than them letting us do it, that's really the only thing the cities done. It's our blood, sweat and tears that's done it. I definitely don't expect everybody to do what I do, but, I'm trying to say this nicely, but you need to get off your butt and take care of your own. If you take care of your own, everything else will fall into place.

It's a lot of parts of the city that stuff like this is happening. It's a lot of community gardens going on. Maybe not on this big of scale, but all of us want to do something like this. I would almost use the term, self organized urbanism, to describe what's going on there. In the sense that there is a kind of possibility, a sort of DIY aesthetic that does in fact exist in the city that is allowing for a lot of individual initiatives to happen.

And you see that in the urban agricultural movement, not only with community gardens but also even with these large scale commercial gardens. There're all sorts of different retrofitting practices, not only on an urban scale but also on an architectural micro scale that are happening in the city. If we think creatively, if we think as entrepreneurs, there is no reason why in fifteen, twenty five, thirty five years, we should be looking at a very different Detroit.

Now and over time. (soft music)