The High Line to Jane Jacobs 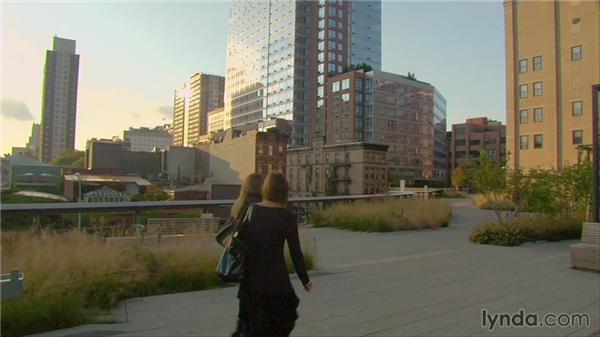 Join Gary Hustwit for an in-depth discussion in this video The High Line to Jane Jacobs, part of Urbanized.

(alternative rock music with electronic enhancements) James: The rise of post-industrial sites and cities around the world have come about only in the past 30 or 40 years and people don't know what to do with them.

They think they should be removed and erased. What we've found over the past 10 years is that you can actually take these post-industrial conditions and through creative design, actually produce something that people love. It's not erasure and it's not preservation, it's really transformation. Josh: I've lived about a block away from the High Line for over 15 years and never paid it any attention at all. Trains ran onto the High Line until 1980, and then they stopped entirely.

It was the realization that that thing was actually this monumental structure that ran 22 blocks, three neighborhoods, it just seemed like this amazing opportunity to experience the city in a whole new way. Robert: I read on the agenda of a community board meeting, it was going to be demolished and sat next to Josh. And we didn't know each other and was sort of interested in it in the same way I was. And no one else in the meeting was interested. Josh: There was one person who spoke who I think was literally frothing at the mouth about how terrible the High Line was.

Robert: So after the meeting we exchanged business cards and said "you know, why "don't we do something together?" When we came up here, we realized there was something magical up here already. James: The High Line was this extraordinary artifact, rusting steel, where grasses and flowers had taken seed naturally. As a landscape architect, a question I always ask is "what will design actually mess up here?" "What through design will you anesthetize?" "Will you destroy?" Because a lot of these sites have a sort of charm to them That really I'm always looking to try to capture and to actually amplify.

Ric: It's much more about a symbiotic relationship between nature and civilization. Because a city is a messy place and so there are lots of places for nature to kind of move in and not take over, but form a relationship with the urban infrastructure in a really interesting way. James: Having the grasses and the flowers come up through the paving was a big part of the design. It really is about showcasing Manhattan in a way that's authentic, it's not overly manicured, overly scripted.

(sirens) And the noises I guess are part of it. (alternative rock music) Josh: The fact that the High Line is really driven by, at the very start, Robert and me, but very quickly a large group of neighbors, community residents, New Yorkers and ultimately people from all over the country, I think has really imbued the park with a communal sensibility that very much affects the environment that is up here.

Underneath the design, a lot of what we see today is the result of the care and attention that went into the zoning. Amanda: We were just passionate about saving the High Line. Zoning was just one piece of it, I only played a role in the zoning. And being obsessive, I think I spent... I said "if I didn't think about the High Line "every single day it was going to come down." That was my mindset. (laughs) (papers rustling) Voiceover: These are the two blocks we wanted to talk to you about.

Amanda: The Department of City Planning is responsible for shaping its neighborhoods, its waterfront, its industrial lands and its business districts. Really shaping the form of the city and where it's going to grow, where it's going to develop. This is a double problem because not only have you lost holding the street wall here, you now have a building that's very out of scale with the Brooklyn Academy of Music historic building. We can't actually design architecture, we can't design the storefront, but at least we can set up these basic parameters that give you the best possibility that this will be a great street.

Our plans have really redrawn the entire land use blueprint of the city because we have to grow by over a million people. And our plans, therefore, have been as ambitious as those of Robert Moses, but we really judge ourselves by Jane Jacobs' standards. Robert Moses was the master builder. He planned looking at the city from above. And his highway building destroyed entire neighborhoods.

He cut off our entire island of Manhattan from the waterfront by building highways down the edges. His impact was profound and his insensitivity was legendary to the texture of the city. His downfall came at the same time as the rise of Jane Jacobs. Voiceover: Jane Jacobs was a journalist. She was not trained as a professional architect or planner.

In the early 60s, there was a plan to put through some major highways that would have knocked down most of Greenwich Village, which was her neighborhood. And she began to write about what she thought the planners really weren't seeing and understanding. They were looking at problems from a 30,000 height and she was really looking at it from the perspective of someone living there on the street.

She was really the first voice who came in and argued that these aren't just these old, overcrowded, small, chopped up little spaces. Instead, there's an incredibly rich social structure here that actually works incredibly well. Communities have a mix of uses. You had people living there, working there, you had shops. She talked about the importance of having eyes on the street, of people who know each other and make the street a safer, more comfortable place.

Voiceover: What Jane Jacobs was able to describe, I think incredibly accurately, is there's something about the DNA of cities and the relationship between physical space and social fabric. She recognized that the minute you take everyone out and put them in a housing block, you lose the fundamental social infrastructure which makes community possible. So, schools, where people meet informally. They weren't necessarily close to where people were living.

So much effort and interest went into creating the house unit that little attention went into "well what happens on the outside?" "Where do kids play?" "Where do mothers look at their kids playing?" Jane Jacobs recognized the difference between peoples and different activities pushed together is what a city is about at its best. Voiceover: She attributed most of these problems to the loss of the heart of the city that, as people move out from the city, this sense of the civic center is really being lost.