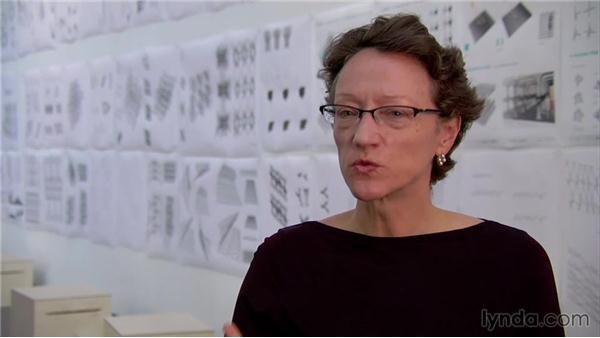 Join Gary Hustwit for an in-depth discussion in this video Ellen Dunham-Jones, part of Urbanized.

Ellen: In the early eighties, as we began to recognize more and more of these problems with suburbia was suddenly increasingly being called "sprawl," and once it had really gotten so congested. As we saw more and more of those problems, different folks began exploring different alternatives. On the west coast, you had Californians like Peter Calthorpe really interested and concerned about how destructive sprawl was to the environment. And his interest in transit oriented development as a much more environmentally sensible way to operate, once you're moving out of the cities.

And he was sort of working on that in the eighties. Then on the east coast in Florida you had Andres Duany and Liz Plater Zyberg. Their principle focus was the social disconnect of people often in suburbs as lots got larger. People didn't really know their neighbors. Lost the sense of community in many, many suburbs, and you see whole suburbs where you see the garage door more than you see a front door.

Nobody really interacts, they seem to be houses for cars. So they were beginning to try to build communities that really allowed and facilitated more social interaction, had more public spaces, more of a mix of uses. It's almost quasi-social engineering. It's not requiring people to be social, but it's at least facilitating that. And, Judy Corbett with the local government commission in California, brought the east and west coast together.

And they recognized that even though they were interested in different things, they had a common enemy, which was really, the regulations that at this point, absolutely perpetuate the system of sprawl. So they started this group called the Congress for the New Urbanism. It's been meeting for almost 20 years now. And it's a forum that gets together to share strategies.

Early on, it was how to get around the regulations that didn't allow mixed use connected street grids, a variety of income price points all in the same community, and the incorporation of transit. So there was a lot of folks getting together and sharing their strategies, showing projects they'd done with each other. And increasingly now the congress has been working on changing those regulations, and making much more sustainable development patterns, both legal and spreading the word about the tools of how to do this, and how to rediscover some of the principles behind making much more walkable places with a mix of uses, a mix of incomes.

And it's a different vision, certainly, of our cities. We've had 50 years now of, almost 60 years, of really specializing in how to build suburbs and suburbanization. And it's taking some time, but we're certainly now, I think, we now have developed an incredible set of tools to begin to retrofit the suburbs and build, reinvest in our downtowns and learn how better protect more of our existing green space from more sprawl.

A lot of what is happening now is this interest in looking at these under-performing properties, and figuring out what to do with them. We've got an enormous number of empty big box stores, dead and dying malls. We've got aging office parks, commercial strip corridors that have seen their better days. So what my co-author, June Williamson, and I have been doing for the last several years, is just trying to catalog and document cases where those properties have been retrofitted into more sustainable places, in one way or another.

And we tend to describe that according to three basic strategies. First is simply re-inhabiting them with more community serving uses. And there's loads of really creative examples that people have come up with of how to. Whether it's turning a big box store into a library, a school, a church. A second strategy is redevelopment, which is where you're really talking about urbanizing and densifying a lot of suburban properties. And it's quite surprising how many cases of, in particular, dead malls, now have been redeveloped into downtowns with walkable public streets, retail at the ground floor, residential and office above, and providing their towns with a town center, a downtown that that suburb never had before.

The mall served to some degree, as a defective downtown. But now they have even more of a mix of uses, and I think a more sustainable downtown. The third strategy is re-greening, because densification is not going to work everywhere. And the reality is we built a lot of our suburbs in places where we probably never should have. Before the Clean Water Act, it was very common to drain the wetlands, to put in commercial development in particular.

And so now as some of those commercial properties are aging, it makes a lot of sense sometimes to go ahead and restore, reconstruct the wetlands, and daylight the creeks that have been culverted under the parking lots, and re-introduce farming, to increase local food production and things. So we're finding a really wide range of things that folks are doing with some of these under-performing properties.

We're over-retailed in this country. We have approximately 46 square feet of retail per person. That's been coming down somewhat in the last two years during the recession. About half of that is in shopping centers. And the next country on the list is Canada, or actually the United Arab Emirates, I think, has just also achieved about that level of retail per person.

But Canada and Australia have half that much. Europe, the leading country is Sweden, with three square feet of retail and shopping centers per capita. So there's no way to exactly determine how much retail really makes sense. But clearly, the internet is having an impact. We're seeing Walmart, Target, any number of the large retailers are coming out with smaller formats of stores, smaller stores.

Both because they want to get into cities, and they've been more in suburban and rural locations. But also, because they recognize that they can synchronize the stores and the web, and they don't really need as much square footage. But shopping in general, I think has also really quite changed. Just the way that who shops and why they shop and when they shop. For my generation, when the first mall opened near me when I was in high school, it was cool to go to the mall.

And that's not to say that we won't still always have enclosed malls. About a third of enclosed malls are likely to continue to do very well as fashion-focused, air-conditioned malls, and, really appealing primarily to teen-agers. But what we're seeing is that the demographics in suburbia have changed dramatically. And as we have more young professionals and more empty-nesters, those are the folks who tend to prefer the more open air oriented retail and real restaurants with real night life instead of food courts.