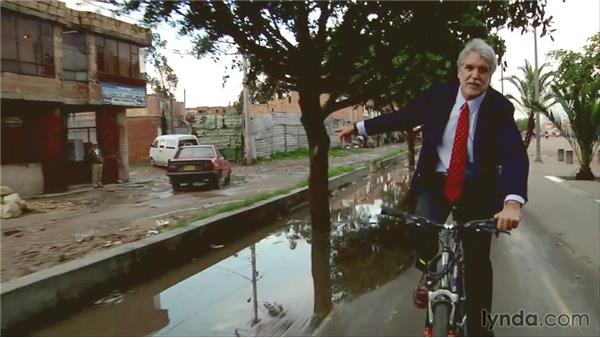 (heavy traffic sounds) Many things about cities are very counter intuitive. For example, it seems to us that making bigger roads, or flyovers, or elevated highways will solve traffic jams. And clearly it has never been the case because what creates traffic is not the number of cars, but the number of trips and length of trips.

So the more road infrastructure you do, the traffic will become even worse. The only way to solve traffic jams is to restrict car use. And the most obvious way of restricting car use is restricting parking. People seem to imagine that parking is a right, almost a fundamental right to be included in the United Nations Charter. In our constitution there are many rights, the right to housing, the right to education, the right to health.

But I don't find the right to park. I don't see any constitution which includes the right to park. So if you ask me where you should park, the mayor can tell them, "It's almost as if you asked me "where you should put your food, or your clothes." This is not a government problem. Before I was mayor, I had never been in a city which hated itself more that Bogota. There was a total lack of self-esteem and lack of hope. So, when I was elected mayor, we started investing in people, in sidewalks, in parks, in grade schools, in libraries, and also we created a bus-based public transport system.

We copied a system from Curitiba, a small city in Brasil. We called it TransMilenio. We gave it a name, because buses in most places have a stigma, a bad image of being for the poor. So we had to raise the bus status. The TransMilenio bus system actually works much more like a subway on wheels than like a traditional bus. Buses go on exclusive lanes.

People pay when they enter the station. When the buses arrive the station doors open simultaneously with the bus doors. You can get a hundred people out and a hundred people into the bus in seconds. Many people save up to two hours a day because before they had to be on traditional buses in the traffic jam and now they can go from one extreme to the other, very fast. For the same cost that we could do a 45 kilometer subway, we do 400 kilometers of TransMilenio.

These systems are also more flexible. Younger cities don't have such a defined center and the center is shifting. So if you put a hugely expensive infrastructure, such as a subway line, then you may find that the new center in a matter of 20 or 30 years is somewhere else where the subway line doesn't go. This system is a very powerful symbol of democracy. The first article in every constitution says that all citizens are equal before the law.

This is not just poetry. It means, for example, that a bus with 100 passengers has a right to 100 times more road space than a car with one. It's a democracy at work. You can really see that public good prevails over private interests. "Buenos tardes." "Buenos tardes." (speaking Spanish) Okay, here we are in part of the Porvenir Promenade.

This is a 24 kilometer pedestrian and bicycle only street, which networks very low-income neighborhoods to the richest areas of the city. I think it is a revolution in the way urban life works. This kind of high-quality infrastructure for bicycles increases the social status of cyclists. Before we had bicycle ways, low-income people were ashamed of using bicycles. Now a high-quality, protected bicycle way shows that a citizen on a 30 dollar bicycle is equally important to one in a 30,000 dollar car.

And here is something interesting. You can see how the pedestrian and bicycle has pavement, and the cars are in the mud. So it's a priority for the pedestrian and for the bicycles, and then later sometime we will pay for the cars. But first, the pedestrian. So this completely shows respect for human dignity, for everybody. Not just for those who have cars who will normally think they are the important ones in developing country cities. Again, this is democracy at work.

"Buenos tardes." (speaking Spanish) In Copenhagen we have for 30 or 40 years had this very distinctive policy to invite people to bicycle as much as possible.

There is a complete network of very good bicycle lanes city-wide, in what we call the Copenhagen style bicycle lane. We always have the bike lanes next to the sidewalks. Sidewalks are the slow traffic, the bike lanes are a little bit faster, and then there will be parked cars, and then there will be the traffic. In this way, you have the parked cars to protect the bicycles instead of the bicyclists to protect the parked cars.

It helps invite a lot of people who would be too afraid to bicycle to get the idea that "I can actually do it also," because now it's much safer. In ten years we have seen the bicycling doubling, and we've seen that now we have 37 percent of everybody commuting to work, arriving on his bicycle. It keeps people fit, it doesn't pollute, and it doesn't take up much space.

It's a really smart way of getting around the city. (street musicians playing jazz) I think that a good city is like a good party. If you ask a guy, "Was is a good party on Friday?" and he says "Oh my dear, I only was home by 5:30 in the morning." If people get involved in social activities, they will forget place and time and just enjoy. That's why I would say "Do not look at how many people are walking in the city, "but look at how many people have stopped walking "to stay and enjoy what is there." (cheering and applause) The challenge is how do we make sure that the public open spaces are inviting and well-used? And in these spaces, design detail makes all the difference.

There should be multiple kinds of seating, many different reasons for people to come into a space. For instance, movable chairs. People, when they sit in a chair that's movable, they just move it just so much, so it's kind of their chair, and it's their place. Movable chairs also let you socialize, they let you be by yourself, they let you be part of the city, or away from the city. (Latin music) Knowing about homosapiens and the kind of creature he is has been a very important key to understanding why some places work, and some places don't.

Much of it is bound to our senses, how long you can see, and how long you can hear, how your eye is horizontal. You see very little upwards. You see much more downwards, and you see much much more out to either side. That is a leftover from the evolutionary process. When the walking animals were walking on the plains, the enemies were out there and in front of you, but they were not up there.

But you should look out for snakes and scorpions and boulders. The eye can't command an area more than about 100 meters by 100 meters. That is the distance where you can see other people and movements. But if it gets bigger, the eye can't see what's going on, then you feel less comfortable. That's why nearly all the squares in all the old cities will be smaller than this 100 meters.