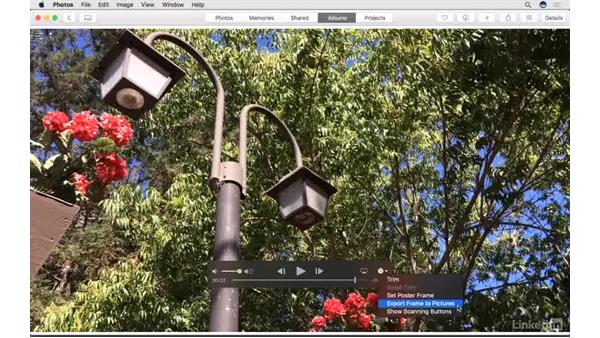 In this video, Derrick shows you how to export a single frame in Photos for macOS.

- [Derrick] If you have a single frame from a movie that you want to keep as a photograph, you can do that, you can export a single frame as a picture. And again, we do that from the gear menu, right here. So let's pick a different shot. And I want that as an image. Now I have done this many times, when I'm interviewing people, and then I need a little picture to go with their bio, or something like that, or to go with a promo. I've taken a single frame out and used it, and it looks great.

So I'm going to go to my gear menu, and I'm going to Export Frame to Pictures, and that is your option, you can't do it to your desktop or anywhere else. Going to go to your Pictures folder. Here we are in our Pictures folder, and here's the frame right here. And if I do Command + I, see 1920 x 10-8, HD, and it's a TIFF file, too, which I think is very interesting. It doesn't send out a JPEG, it sends out a TIFF. One of the nice things about TIFFs are, that you can edit it, and you won't have any destruction of the image itself, because it's not compressed.

So that's kind of cool, too. So anyway, that's how you take a single frame out of your movie, make a picture. And then if I wanted to, I could drag this into my Photos library and have it as a still shot also.

11/30/2016
Manage, enhance, and share your photos in a variety of new ways using Photos for macOS. In this course, photographer, author, and educator Derrick Story takes a deep dive into this Apple photo management application. To start things off, Derrick goes over the application's new features, including Memories—which automatically scans your library to create photo collections—object and scene recognition, and a new editing slider called Brilliance.

Later, he walks you through how to use the application's basic editing tools, as well as more advanced elements like the histogram, a graphical chart of the tones in your pictures. Learn how to share your images to social media sites like Facebook and Twitter, work with video taken on a camera or smartphone, and tap into the power of iCloud to access your images from your personal devices.

Are you still using OS X El Capitan and its older version of Photos, Photos for OS X? You may want to check out Derrick's Photos for OS X Essential Training course, which covers all of the features in Photos 1.0.
Topics include: