What is Apache HTTP Server, and what is it used for? 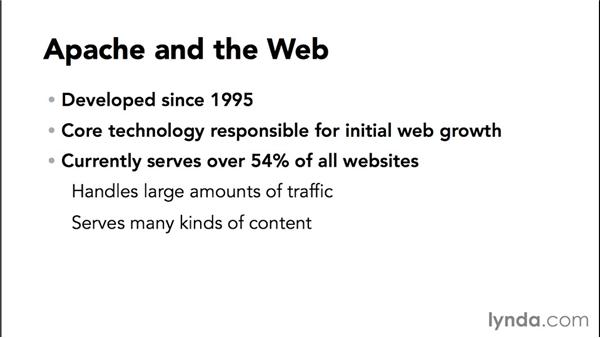 There's a number of reasons you might want to learn about Apache. For example, your job responsibility may have just changed and suddenly you're expected to know how to manage a web server. Maybe you discovered a dusty computer running in a closet with a note taped to it saying, don't unplug or the website goes down. You could just want to learn more about web server administration. The path to learning is varied and there's no wrong reason. This course's goal is to teach you how to investigate an existing Apache web server to learn how it's configured and how to manage it.

Apache is a big topic, in that it's complex system with many nuances and configuration. And I'm not going to explore every single aspect. Instead, I'm going to focus on creating a foundation on which to build knowledge. This course will feature practical applied techniques for working with a server rather than trivia. Starting with this chapter, we're going to explore what Apache HTTP server is and what it's used for, along with common ways to install Apache. And finally, how to manage the service itself. Let's start at the beginning. What is Apache? Apache HTTP Server is a web server application.

A web server delivers content that can be accessed through the internet. This includes HTML documents, multimedia such as images, CSS style sheets, and client-side scripts such as JavaScript. Apache HTTP Server is open source, which means the original source code is freely available for collaboration. Many hands make light work and hundreds, if not thousands, have contributed code. Developed since 1995, Apache was a core technology responsible for the initial growth of the world wide web. Today, Apache serves over 54% of all websites and with good reason.

It's very robust, meaning it can handle large volumes of traffic on a single server. Apache can also serve many different kinds of content with minimal configuration. It scales really well. So the same course offer can serve tiny static sites for the couple requests an hour to large enterprise applications with hundreds of thousands if not millions of hits per day. The fact that it's free to use is also positively contributed to its adoption. Apache is a highly modular system meaning that functionality can be easily added to the core application.

Modules encapsulate a specific group of functionality, including support for cryptographic protocols like SSL, server-side programming language support like PHP, and load balancing across multiple servers to handle large amounts of traffic. Apache has gone through a number of major versions. Knowing which version of Apache is being used is important in that both included functionality and configuration techniques differ between versions. Version 1.3 was produced from 1998 through 2010, when it was discontinued.

Version 2.0 was started in 2000 and was finally laid to rest in 2013. Two point two's been available since 2005 and still maintained. Two point four is the current major version and it's been around since 2009. That's enough background. Let's see what we're working with. The first step is to turn on the virtual appliance. If it's not already running, open up the virtual box manager. Select Apache and click start. After a moment or two, the server will be up and running. Let's see Apache in action by switching over to the browser.

Navigate to http local host port 8080. Neat. We've been served the Lewis Carroll classic, Alice's Adventures in Wonderland, provided from Project Gutenberg. We know that Apache's running which is a good start. How can we find out how it was installed?

8/19/2014
Quickly learn how to manage and configure an Apache web server. This course is designed for IT professionals, office managers, and anyone who's been saddled with an Apache server without any idea of where to start. Author Jon Peck describes what the Apache HTTP Server is and what it's used for, and provides practical information on configuration and logging. Then discover how to troubleshoot common problems and control the server, and learn what questions you should be asking when determining whether to delegate this responsibility to a third party.

IT and Hardware IT Apache

Video: What is Apache HTTP Server, and what is it used for?