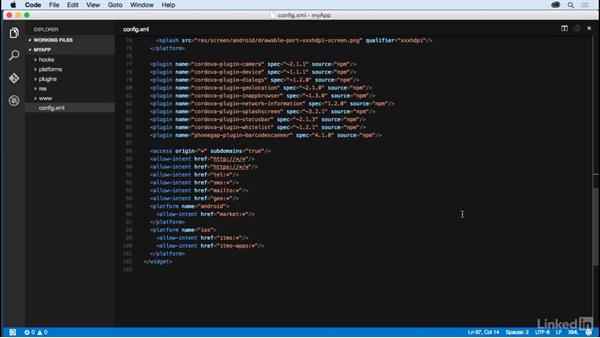 Recently Adobe PhoneGap and Apache Cordove increased the security model. In doing so, additional settings need to be enabled in order for mobile applications to have access to the phone's dialer, the text messaging app, email, and app store links. Chris G

- [Voiceover] Although the next bit of code…here in our config.XML file…from lines 77 to 86 actually refer to the plugins.…We're actually gonna talk about plugins in a later chapter,…so for now, let's just get past it…and look at the last little section.…So, from lines 88 down through 101,…this deals with working with external resources.…Remember, since our Cordova application is running…within a web browser, the same security restrictions…that a web app would have when trying to access resources…from another domain, apply as well, as well as interacting…with various other device features,…such as accessing the phone dial or SMS geolocation.…

These tags allow us to interact into those spaces.…So, to enable our app to access these remote resources,…we can add our access tag here.…Here we're gonna be wide-open,…definitely not something I recommend in a production app,…we'll set the origin to be anywhere…and allow any subdomain.…So, at this point, we can access anything we want.…So with my access element set this way,…