Set up iOS device for development 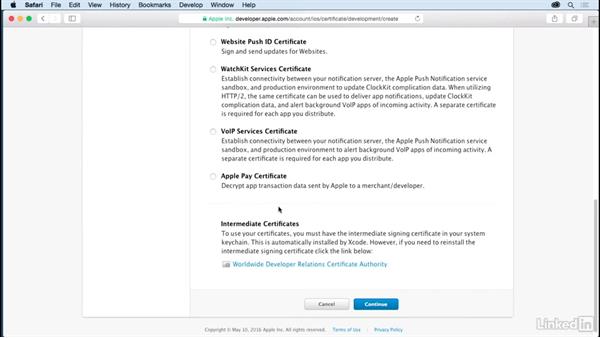 - [Voiceover] In order to deploy our application to an iOS…device, there are a few requirements we have to meet.…I've already signed in to the developer.apple.com website…using my Apple ID.…What we need to do is actually go take a look…inside the certificates ID and profiles option.…The first thing we need to do is actually define an app ID.…So go ahead and click on that.…And here we have a list of various app ID's…I've already created.…Let's create one specifically for our CLI,…so click the plus button,…scroll up a little bit here.…

We need to give it a description name…so let's go ahead and call this ApacheCordova,…and app prefix, in this case we're going…to select the team ID.…'Cause that is now the preferred method, and since we're…going to use this for a variety of applications,…I would actually recommend using this for the Wildcard ID,…especially for development purposes.…So, let's just call this calm.lynda…and then we'll use the star to act as a Wildcard.…

So anything starting with that prefix in this…reverse domain notation, will now work.…