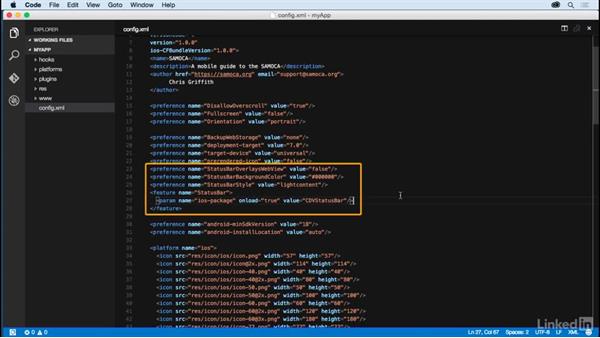 Apache Cordova supports several iOS specific settings in the config,xml file. Chris Griffith shows how to disable the traditional Apple icon effects on your application's icon. He also covers setting a target iOS versions for the app. You can also learn w

- [Voiceover] There are quite a few IOS specific settings…you can configure.…Most of the time we include these at at the default setting…and never need to include them into our config XML file.…The first one we'll look at, line 19 here,…is the backup web storage.…This defines whether or not any of our backup data…uses iCloud, local, or no backup storage method.…Since our app doesn't have any source needs,…we're gonna set this to none.…Now, if I want to control which versions of IOS…my app will run on, I can use…the deployment-target preference.…

And here we're setting the value to 7.0 and higher,…meaning that version or greater…will be able to run our application.…The next IOS specific preference is the target-device one.…And here we're setting the value to universal.…This allows us to restrict our application…to either an iPhone, or an iPad, or both.…If I wanted to restrict this to just iPads,…I would use tablet as my value.…If I want to restrict it to just iPhones,…I would use phone.…Since I want this to run on both iPhones and iPads,…