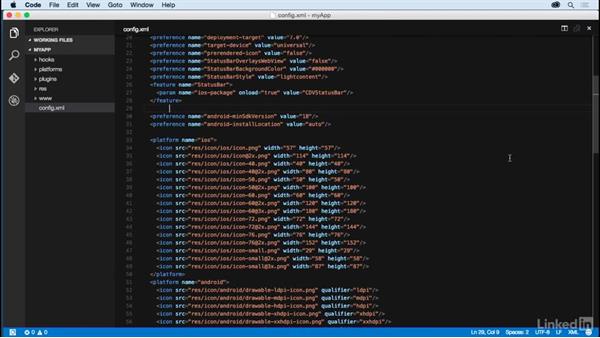 In this video, Chris Griffith talks about how you can control the minimum Android SDK or API level that your application will require. In addition, you can learn how to define where your Android application can be installed, internally, on external SD car

- [Voiceover] Now, let's take a look at some of the…Android-specific settings…you might want to configure.…Again, most of the time you can leave these in their default…value, and never need to include them…in your config.xml file.…A common one to set is to restrict the oldest version…of Android that our app will run on.…Older versions of Android did not always have the best…web engines, and as such, hybrid applications…suffer performance problems.…By restricting the minimum STK value,…we can exclude these devices.…So, by setting the android-min STK version,…and here we're setting it to a value of 18,…we're restricting it to run…only on that version of the Android API.…

Another Android preference…you may wanna set is the Android-Install location.…Many Android phones have both…internal and external storage,…and this allows our Android application…to be installed if we want…with the value auto or external onto the external device.…So, we have those options.…For a complete list of all the supported parameters…with an Android,…