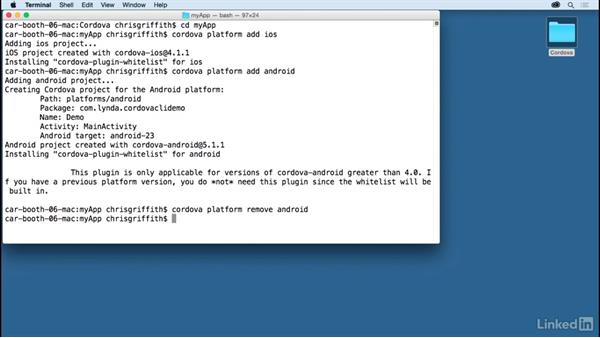 Chris Griffith demonstrates how to remove a build platform from your project, and explains why you might need to do this when debugging your application.

- [Voiceover] If for some reason, you ever need…to remove platform from your environment,…simply use cordova platform remove…and then the platform name, say, android.…Now, the reason you might do this…is sometimes during some of the installation process…with plugins and such, things can get misaligned…and actually, a common way to just sort of reset…the system is actually remove the platform completely,…reinstall it, and then that will then…re-synchronize the various plugins.…

Not sure why it works, but I've seen it work.…So, if for some reason you do need…to remove a platform like I said,…it's just simply cordova platform remove…and the platform name.…