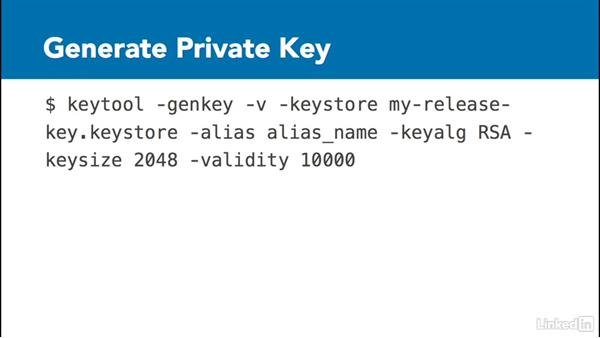 Once you have completed your development and wrapped the testing cycle, it is time to submit your application to the Google Play Store. Chris Griffith outline the general steps required to submit your Android app. He covers the self signing commands need

- [Voiceover] Now unlike iOS where the signing…is all really controlled by Apple…to build a release for Android…to be submitted into the Google Play Store…we actually control the entire process locally.…To generate a release field for Android…we use the following Cordova CLI command…cordova build…we're gonna pass in --release…which will set the release flag…and then targeting Android.…

The Cordova CLI will now generate a release build for us…and there we now have build the initial steps…of a release for our Google Play Store submission.…Now this APK is still actually unsigned…and we can actually find that…go in to our app…into platforms…Android…build…outputs…apk.…Now we can now see Android release unsigned…as now a new file within our APK directory.…

Now we need to actually sign this unsigned APK…and then run the alignment utility to optimize it…and prepare it for submission to the Google Play Store.…If you already have a signing key from another app…you can go ahead and skip those steps…and use that one instead.…First let's generate our private key.…