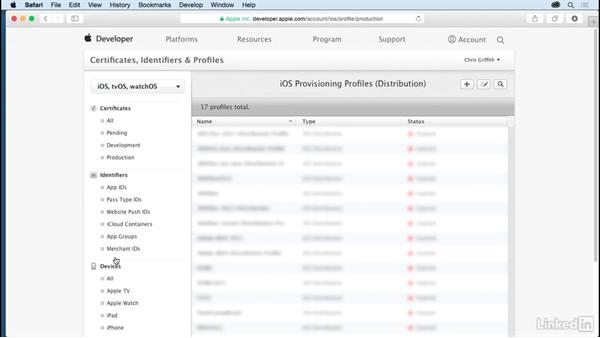 Once you have completed your development and wrapped the testing cycle, it is time to submit your application to the Apple App Store. Chris Griffith outline the general steps required to submit your iOS app to the app store.

- Once you've finished testing your app…and are ready to submit it to your platform's app store,…you'll need to prepare a special release version.…In this video I'm going to show you…the steps you need to take.…For iOS we're gonna need to generate…a distribution profile.…So let's go ahead click on the…certificates, IDs, and profiles.…You're going to scroll down,…and we'll see our provisioning profiles distribution.…This is where we would create our distribution profile…if we were going to release this to the Apple apps store.…However, once you start this process names get locked down,…so actually not gonna show you this.…

But since this is a native application…we're gonna follow the exact same procedures…that any other native application developer…would do for iOS.…So you can follow their guidelines and their steps…in the same exact fashion.…So just be aware when you're ready…to release to the app store,…you're just like all the rest…working through the Apple system…and getting into the app store.…