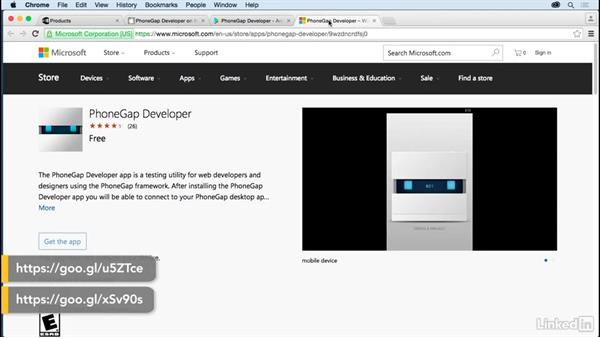 Chris Griffith demonstrates the PhoneGap Desktop application and its mobile companion apps, as an alternative to the use of either the PhoneGap or Cordova CLIs.

- Before we wrap up this course,…I want to show you a set of tools…that can be used with the Cordova and PhoneGap cycle.…Adobe has released a pair of apps…to a system in development, the PhoneGap apps,…in term, Cordova apps.…The first is an app that you install on your computer,…known as the PhoneGap desktop app.…It's available for both Mac and Windows.…Scroll on down, reading all about it.…You can download the desktop app.…I already have it installed.…So let me go ahead and close chrome…and show it to you real fast.…

Really what this app is,…is a graphical interface to several…of the PhoneGap seal eye commands.…So if I want to actually just create an application,…I can do that here,…or even open an existing one.…I can delete it, various settings,…because this app actually pairs…with some mobile applications.…If I need to see the output, I can see that here.…Now set, this is the companion set.…So in addition to the desktop app,…there are three mobile applications.…

In fact, they're available for iOS, Android,…as well as Windows phone.…