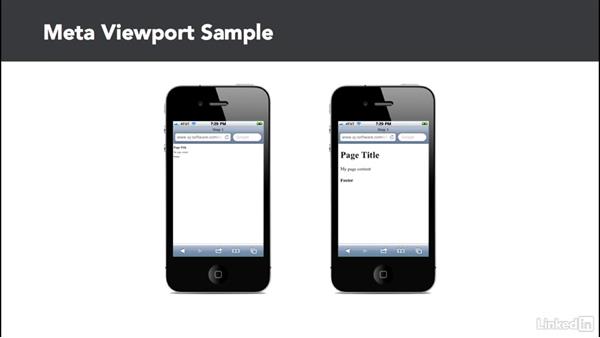 Understand the needed changes from a desktop based mobile web page to make them compatible with a mobile web browser and in turn with Apache Cordova. Chris Griffith demonstrates how the meta viewport tag is a critical addition to your html files.

- [Voiceover] There are a few important things…that any Cordova application needs to have included…inside of its index HTML file.…First, we want to make sure…that you've included the meta Viewport Tag.…Now, this tag was originally introduced by Apple…with the original release of the iPhone,…and this Tag has been adopted by all the lower browsers…as a solution to find the rectangular area…that provides the drawable region for your webpage.…This is best illustrated by looking…at these two sample webpages.…The sample webpage on the left in an iPhone…shows what it looks like…without the Viewport Tag established.…

On the right, the same page with the Viewport Tag enabled.…As you can see, the page with the Viewport looks correct.…Since Cordova-based applications run within a browser,…the same rules apply to us.…This is the basics of a Viewport Tag.…So it's meta name viewport,…and then we set its content properties.…Here we're setting the initial scale to one…and the width to the device width.…This value defines the total number of horizontal pixels…