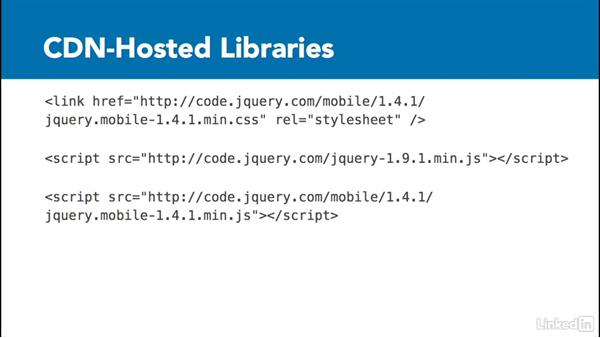 Find out why including external JavaScript and CSS files should be included locally with your Cordova application, rather than be hosted on content delivery networks.

- [Voiceover] You will also want to make sure…in your index.html file, that any external resources,…like our jquery and jquery.mobile libraries,…CSS and JavaScript, are locally-stored…and not externally hosted on a server…or on a content delivery network, or CDN.…With multiple applications, you need to consider…how the app function, in a completely off-lying case.…So, this would be the sample suggested URLs…if you went to the jquery mobile site,…of where to pull down their libraries,…when in fact, we need to reroute this to locally hosted,…using something like this.…

So, with our locally hosted jquery and jquery.mobile files,…our application will still be able to function,…even if there's no network connection.…